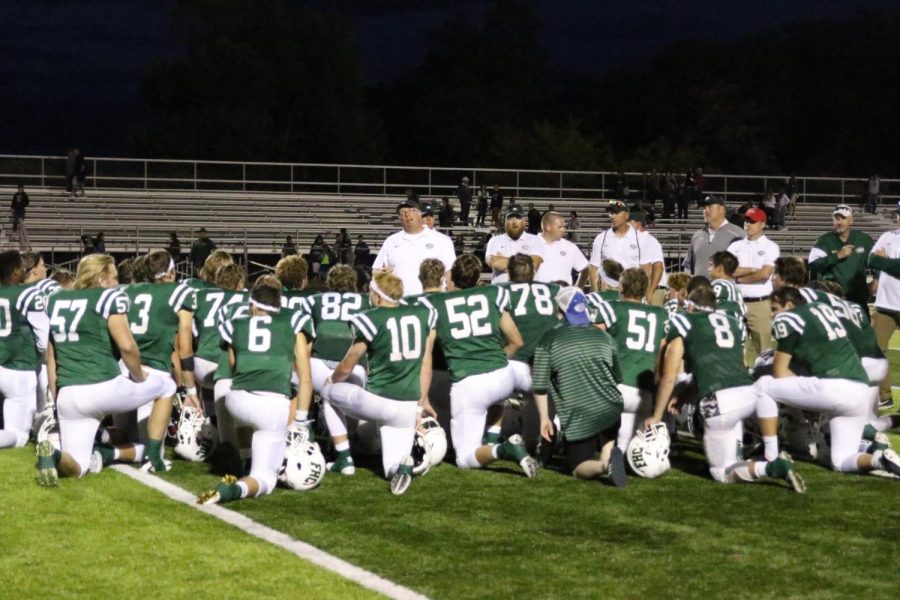 Senior Bryce Clay was all over the field Thursday night in a thumping of the Jenison Wildcats, 41-0. A 101-yard pick six kicked off Bryce’s huge night. Bryce’s clutch INT came after the Ranger defense was pinned inside their own five by a Jenison interception. Bryce quickly struck again with the first play of the second half going an 80-yard offensive run, and finished with a punt return for a touchdown midway through the third quarter.

“He’s a special athlete,” said head coach Tim Rogers. “He’s so dangerous, and I say to our staff that he’s worth 14 points a game. Whether it’s intercepting a ball or catching a pass, he’s just such a special player.”

The Ranger defense was also an impenetrable unit tonight. Three turnovers and a shutout win proving they were right where the defensive staff wanted their unit to pick up from last season.

“We have a lot of returning players,” Rogers said. “We have plenty of guys who had a lot of downs last season too. We’re running our defense for the second season, and we’re starting to get really comfortable with what we do.”

Stop after stop from the defense supported a slow start to the Ranger offense. After back and forth punts from the Wildcat and Rangers offenses, FHC finally put together a drive with the ground game late in the first quarter. Senior quarterback Jace Thornton and senior running back Moise Guerrier pounded the ball down the field, with Jace eventually putting it in the end zone with a two yard TD run.

“I would have liked to put together a few more good series on offense,” Jace said. “I’m really happy with how the offensive line played though. They helped me a ton and helped our huge running game tonight.”

The second half was where the offense hit their stride, putting the first play of the second half in the end zone on an end around run to Bryce. Senior Isaac Torrey and junior Luke Majick put in two more touchdowns in the fourth quarter.

The Rangers have big goals after last years exit from the playoffs to long time rivals in the Lowell Red Arrows. A win like this was the right way to start off a big season.

“We’re going to take it one game at a time,” Bryce said. “But there are definitely some big plans for us, and hopefully we can go a run the table.”