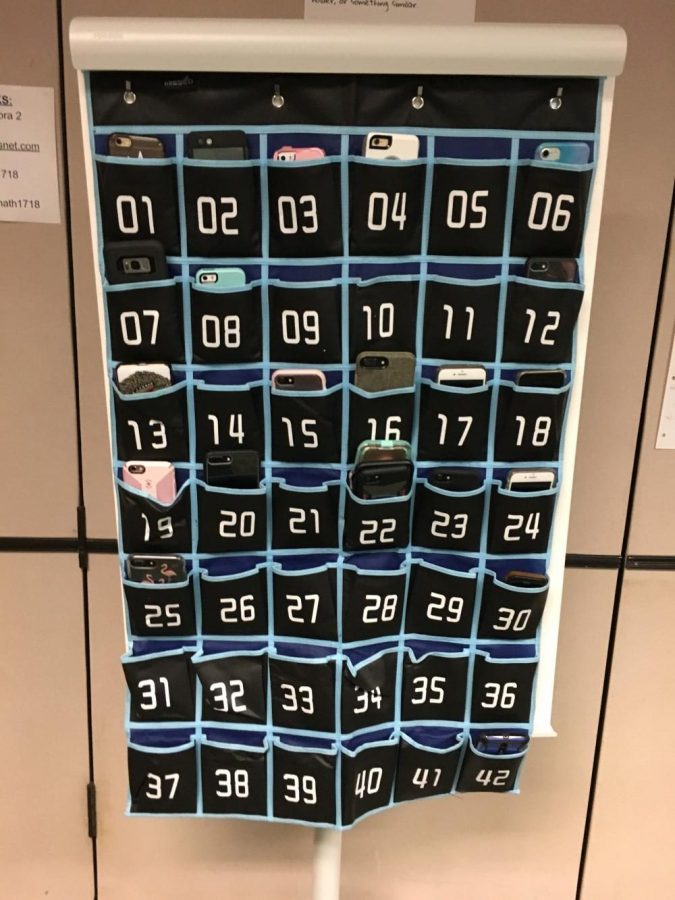 Almost every teenager can probably recall a time in their life when an older adult has told them the dreaded phrase: “When I was younger, we didn’t have cell phones.” Cell phones and new technology have helped advance society, but they do not come without their drawbacks. Recently, FHC announced a new cell phone policy for all students, aimed at limiting classroom distractions. This new policy states that all cell phones must be turned off in bags during all teaching hours, or turned off in a classroom provided spot. There is a clear need to limit cell phone distractions in school. While cell phones may pose an issue in the classroom to a small portion of kids, this cell phone policy is taking many steps back in the wrong direction.

Before this new policy was created, students were instructed to not use their phones during instructional time. If a student was using their phone often in class, teachers were advised to take students’ phones or send phones to the office for the rest of the day. In my experience, only a select amount of teachers would take phones away and use this set of rules for their students. Students do not learn discipline and respect for the rules when there are no consequences for their actions. Perhaps a stricter enforcement of the guidelines should have been attempted before a new, harsher policy was created. This new policy not only punishes those who consistently use their phones during class time, but also those who use their phones for reasonable purposes.

Many students and parents text throughout the day in order to stay in contact. This new policy acts as a danger for both students and parents alike. Often, there can be stressful and urgent situations at home that continue to be of importance during the school day. An unintended consequence of this new cell phone policy is a breach of family privacy. The fact that messages from home now have to be delivered through a middleman in the office can be very unsettling. Most students would rather receive important news or updates directly through their parents. While not all messages from parents contain high stakes, some after school plans may change during the day at school. For those students in sports and clubs, times can be moved to later, and kids may find themselves without a ride home. For this reason, students need to be able to contact their parents or siblings in order to coordinate rides, and they should be able to keep their cell phone in sight during appropriate times.

For those students who still wish to use their phones at inappropriate times during school, they should have to deal with the consequences for their actions. For most students, the cell phone distractions can lead to lower grades. If they wish to use their phones and miss valuable teaching moments, that should be on them. Students need to learn the value of paying attention during class. When these current high schoolers choose to go off to college, they will not have professors constantly telling them they need to get off their phones. Paying attention during class is a personal responsibility that must not be forced upon students.

This new policy is very contradicting. With a wide reaching program like E-Achieve, it is counter intuitive to have all cell phones turned off. Contrary to popular belief, many students use their cell phones for the E-Achieve program. Not all students can afford a personal laptop, and it is a very time consuming process to check out a device in the media center. While cell phones can be a distraction, laptops can also be distracting. People can simply pretend to be taking notes while actually be playing games, which is just as harmful as cell phones. While both laptops and cell phones have the same basic features, the only major difference between the two is the negative stigma surrounding cell phones. Teachers and administration should have been thinking of the dangers laptops can bring to the classroom when implementing the E-Achieve program.

There are many drawbacks to this new cell phone policy. While cell phones may be an issue for some students, this policy gives route to several major flaws. Hopefully students and administration at FHC can work together collaboratively to combat the issue of cell phone distractions in the classroom.