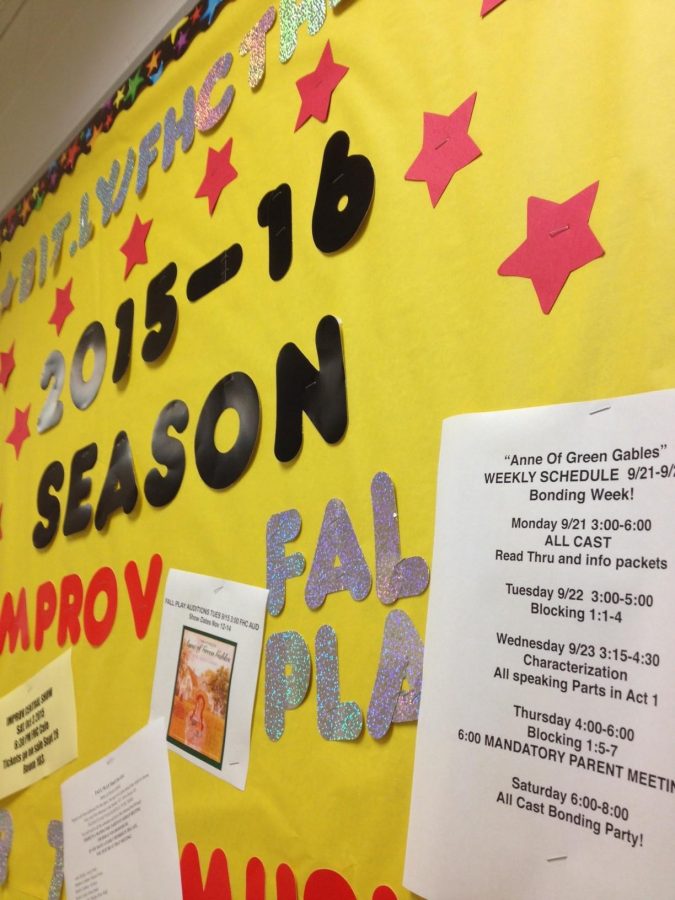 As the lights go down in the FHC auditorium and the first line of Anne of Green Gables is spoken on Thursday, November 12th, opening night for the fall play, it might be easy for audience members to look at the the sets, listen to the lines, watch the acting, and forget that the piece of drama before them began as fifty-five puzzle pieces.

This past Monday, September 21st, that puzzle began to take shape in the form of a 35-person cast list. As those 35 cast members begin daily rehearsals this week, the puzzle will come to look more and more like the play students will have the opportunity to view on November 12th, 13th, and 14th.

“It’s always hard choosing roles,” said English and theater teacher Robbin DeMeester. “We had 55 kids audition and I chose 35 … so I did cut people, and yes, it was hard. … I look at casting as a puzzle piece. You have an actor who could fit into four different roles through their audition through their audition-callback process, big or small. You don’t necessarily plop them in the first role that’s listed on the cast list. I put together the puzzle, then I see where he or she can fit so that all the pieces fit together perfectly.”

The puzzle that was created after cuts were made is, according to DeMeester, an especially diverse and large one. These 35 students, along with crew members, will be creating the world of Anne Shirley in the FHC auditorium. Set in the early 20th century, the show is about a young girl (Anne, played by senior Avery Ferin) who is mistakenly adopted by a brother-sister duo who never expected to raise a child. Anne is a “quirky” girl who, despite her accidental placement with Matthew and Marilla Cuthbert, becomes a beloved member of their family and their town.

“Anne has a huge imagination and an even bigger heart,” DeMeester said. “So everyone who meets her in some way is affected by her. She changes the course of the town through her actions.”

Anne of Green Gables provides DeMeester and the theater program with the opportunity to do a family-friendly show that will appeal not only to the student body but also to the rest of the community. Choosing plays from year to year is another sort of puzzle: DeMeester takes into account the genre of each play and tries to expose students to a broad range of styles in their four years at FHC. Anne of Green Gables is a show that DeMeester, Ferin, and student director Kaila Kotas believe will be enjoyable for all potential audience members.

“It’s a feel-good show,” Ferin said. “It’s different from last year, but I think they’re both the same in the way that everybody will kind of leave feeling good. … It’s fun for adults, it’s fun for teenagers, it’s fun for kids. It’s just a very good show.”

The process of turning what is now only words on a page into what will be a full-fledged theatrical production in November is a grueling yet incredibly fun experience for the cast members.

“So many people from different groups of the school come and participate in theater, and you just meet a bunch of really cool people that you never think you’d ever meet,” Kotas said. “Even though I’m not on stage, it’s like an adrenaline rush that you get during the show. … Everyone grows really close and everyone’s going to be making a bunch of new friends and getting really close with a bunch of people that they never would have [otherwise.]”

Ferin believes that the fun the cast members have creating the show is evident on stage, creating a final product that will interest and entertain students.

“It’s so much fun watching your peers and people from the hallway that you see every day onstage as a completely different person,” Ferin said. “This show is set in the early 1900s, so it’s period costumes, and some people have different voices. It’s so interesting watching people completely transform themselves. It’s cool to watch your classmates create something so big and so creative.”

DeMeester encourages all students to support their peers in their hard work by coming to see the show. Cast and crew members attend 2-hour rehearsals four times a week to work on blocking and to improve their portrayal of their characters. All this time and energy knits together a close theater family, and, in DeMeester’s opinion, merits the respect and support of the entire student body.

“This is a show you can safely bring a cousin or family member or a little sister and know that you’re going to have two hours of suspended reality, your heartstrings will be tugged, you’ll get some laughs, and you’ll get to not only support your peers and the program but step outside of your own self and recognize that there’s a lot of kids in our school, both in athletics, music, and theater, who are working super hard on hours not school-related to bring enjoyment and enrichment to peoples’ lives,” DeMeester said. “That’s of value.”