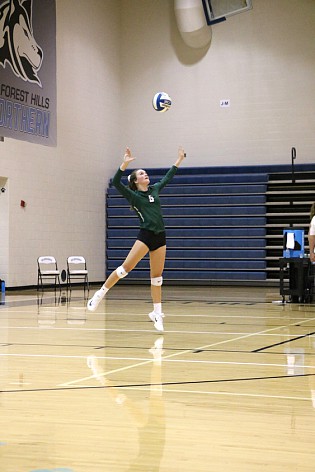 Playing a varsity sport at FHC is not an easy thing to do. Our school praises our athletes and works them hard, pushing them to their full potential. The task of being a part of a varsity team is not only physically challenging but mentally as well. As upperclassmen, the majority of varsity players have developed over the years and built themselves up to this point but for some, the transition is easier. As freshman athletes participating in a varsity sport, they show great amounts of discipline and talent.

Hannah Bergman is the one and only setter on the FHC varsity volleyball team. As a freshman, Hannah brings a level of maturity and skill that is not common. With high-level training at Michigan Volleyball Academy, she has been working as a setter since 6th grade. Hannah plays 6 rotations all the way around the court as the setter and has perfected a wide variety of plays for the team to run. Her poise and confidence on the court disguise the fact that she is only a freshman yet still running the plays for the varsity team.

Sometimes Hannah gets beaten down by the pressure and needs some extra encouragement from teammates and coaches, but then she gets right back into her groove and continues making plays and leading on the court.

“What is the hardest part about being younger than almost all of your teammates?”

“The hardest part was not knowing everyone on the team but now everyone is so nice and supportive.”

“What is your favorite thing about being a part of the varsity volleyball team?”

“My favorite thing about being on varsity is the faster-paced game and higher level of competitiveness.”

“How do you hope to see this season end?”

“I hope that by the end of the season the team has a winning record and that we all become closer.”

“What has been your most difficult challenge this season?”

“The most difficult challenge I have had this season has been trying to create a balance between school work and volleyball.”