Senior Avery Ferin turns a lifelong love of poetry into her own published book. 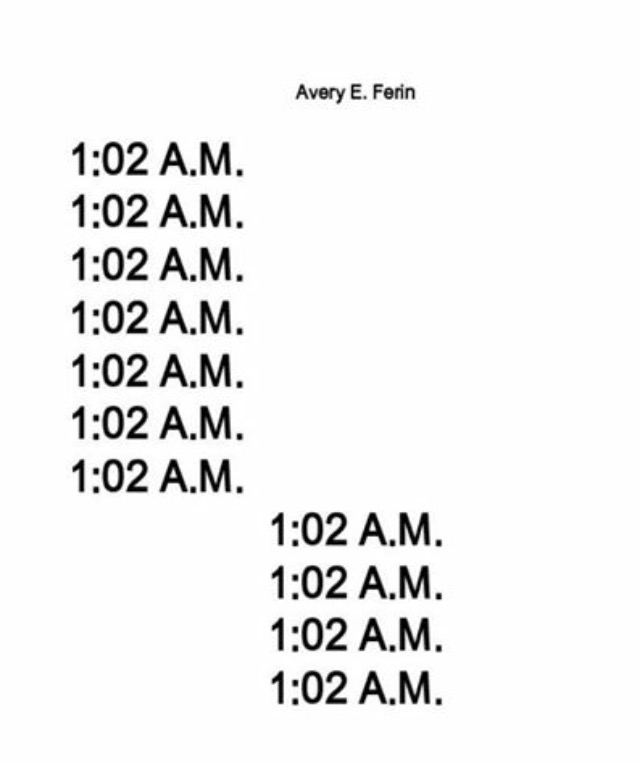 Senior Avery Ferin has always loved poetry, even from a young age. With her favorite book being Where the Sidewalk Ends by Shel Silverstein, she read many different books of poetry all through elementary school. As middle school began, she started listening to spoken-word and performance poetry. Then in eighth grade, she began to write her own poems. Come high school, and Ferin has been in the Random Acts of Talent show twice now for her phenomenal spoken word poetry. And now, she has a published poetry book of her own.

“I think what really ultimately made me want to write this book was the fact that I’ve been writing poetry for so long,” Ferin said. “It’s always been a way for me to escape from everyday life and to really put myself into something that I know is productive.”

She said that the book’s title, 1:02 AM, is based upon her lucky number. She also said that it represents her most productive time of night.

“The time one a.m. in general is when I’m the most able to write and work because my emotions are at an all-time high,” Ferin said.

So who exactly helped Ferin get her work published? According to Libby Ferin, Avery’s mother, no one did. She and her husband knew nothing about their daughter’s publishing plans.

“She never told us about the project until one morning,” Libby said. “She came in the room and said,’Hey, just wanted to let you know that I published a book of poetry.  It’s called ‘1:02 AM’ and it’s on Lulu.com if you want to order one. The book is selling for $12.95 in paperback. I’ve already made a couple hundred dollars on it.’ We couldn’t have been more surprised!”

Fellow senior Cam Harris also knew nothing of Ferin’s project until it was published, and was delighted when she finally told him.

“I was ecstatic,” Harris said. “I just couldn’t even imagine how she was feeling, to get published like that at such a young age.”

According to Libby, Ferin worked on her collection and perfected it over the course of one month. She then did all the research herself, including finding a publisher, getting them her work, and providing a layout and design for the cover. Libby also said that this is one of the first times she’s been able to read her daughter’s work, as Ferin usually keeps her poetry personal and private. She was overwhelmed by the quality of work her daughter put to the page.

“She has always been very contemplative, observant and one to question everything,” Libby said. “I think the writing she has demonstrated in her book is beyond her years.”

Ferin says that when she published her work, she did it for personal reasons. She wanted something to be proud of because at the time, she didn’t have anything that she believed she was good at. She didn’t have very many goals, and this became a huge accomplishment and boosted her self confidence.

But publishing her creativity is not the only goal Ferin reached.

“I have a huge collection in this box in my closet of all these different little poetry books from my favorite poets,” Ferin said. “It’s always been a dream of mine to put my own book in that box and be like one of them.”

Ferin also stated that she has one place specifically that she draws most of her inspiration from.

“I guess I find a lot of inspiration in my car because I can go anywhere I want [and] I can see all kinds of different people,” Ferin said. “I have so many different things in my car that I can take inspiration from.”

She says that writing poetry, for her, is a way to map out her emotions and dissect them on paper when she doesn’t understand why she’s feeling a certain way. Harris agreed, stating that it gives Ferin a way to figure out what’s going on with herself, particularly when her thoughts are especially jumbled.

“I think for a lot of people, poetry’s a way to formulate their thoughts [into] words,” Harris said. “With poetry you can put your words to the paper and figure out what you’re thinking.”

Libby spoke fondly as well of her daughter’s passion, saying that Avery is someone who needs an outlet for her emotions and uses poetry as a way to tell her story.

“She is a very passionate, emotive person and she has found that writing is her way of true expression,” Libby said.

This method allows Ferin to pour all of her feelings and thoughts into those words. Because of this, she was rather nervous when she first considered publishing her work.

“By allowing people to read it, it kind of put me in a very stripped down position,” Ferin said.

Libby agreed, saying that her daughter sharing her thoughts like this “is a pretty transparent and brave thing to do.”

Despite the way Ferin feels about getting her words out in the open, her mother and Harris think differently. Having both read her book, they believe that her words are inspirational and could touch many people’s lives.

Harris said that Ferin’s love of writing has influenced him to become a better writer and has helped him understand poetry better.

“I’ve never been a good writer. I’ve never had a way with words,” Harris said. “It’s been cool to see a different perspective on the world because I’m one hundred percent math and science, and having the other spectrum has been really sweet and cool to see.”

He also hopes that Ferin’s words reach others in some way.

“To know that one way or another, her words are reaching someone’s mind is really cool,” Harris said.

Libby agreed, stating that her daughter’s words are exceptionally powerful.

“If she can touch someone through her poetry, maybe help someone look at their own issues in a new light, I think that’s powerful stuff,” Libby said.

With one collection already published, Ferin says that she’s going to work on another one that has longer poems, since her published work ranges from only three lines to just a page long. But what else does Ferin hope to accomplish?

“I’d like to do more performance poetry [and] more spoken word,” Ferin said. “Either that or I’d love to write some short stories, so that might be a next step for me.”