Is Blood Thicker Than Water? 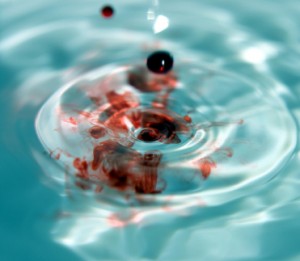 “After all, blood is thicker than water.” A saying I hear often in my own home, especially on those occasions where family time is being pitted against going out with friends. For those who aren’t familiar with the phrase, it implies that the blood shared by a family’s DNA is stronger than the “water” of friendship, boiling down further to the idea that family trumps friends every time. The saying has become quite the cliche through its overuse; even seasons of the wildly popular show “Survivor” have been based on the concept.

However, when I recently learned that the phrase implies exactly the opposite, I was taken aback. I had heard this my whole life… how could I have it completely backwards?

The little idiom is actually a few words longer: “The blood of the covenant is thicker than the water of the womb.”

I was so startled by this discovery that I decided to dig a little deeper. As it turns out, the phrase is extremely old and derived from warfare. The “blood of the covenant” is the bond created by soldiers who had killed together; which, to the writers of the day, was a stronger bond even than that of birth. This simple compilation of words had been twisted by time into a saying 180 degrees in the other direction from its original meaning.

This realization got me to thinking, and got me to wondering which of the phrases rings true in my life: the older version focused on trials to create friendships, or the modern version directed towards family. To be honest, I don’t know if I found the true answer. And I don’t know if there is one. I certainly don’t have it.

For me, the deeper bond of the two changes daily. There are days when I am all in for my friends, and I won’t be home for 12 hour periods at a time. We can hang out at a friend’s house or roam the city together, looking for something to interest us until we make some memories. Or the days that I have a rough go of it and they show up to get me back on my feet. Those are the days when I feel like my friends will be there for me through anything, the days that friends trump family and blood trumps water.

But there are other days when I’m really, really low, and can’t get myself out of the house. Whether it was a bad swim, a misunderstanding with a friend gone awry, or just being left out, I sometimes end up at home in my bed or on the couch thinking about life in general. During those rough patches, a few friends may show up to try to help out, but my family is the group waiting for me to get back up and encouraging me to do so. Those are the days when water beats blood.

Even without a solid response to this cliche, the people in my life are the rock I am blessed enough to build my life on. So if blood is truly thicker than water, I will be happy with whatever that implies.