Improv Central: a group of hilariously supportive and close family within FHC 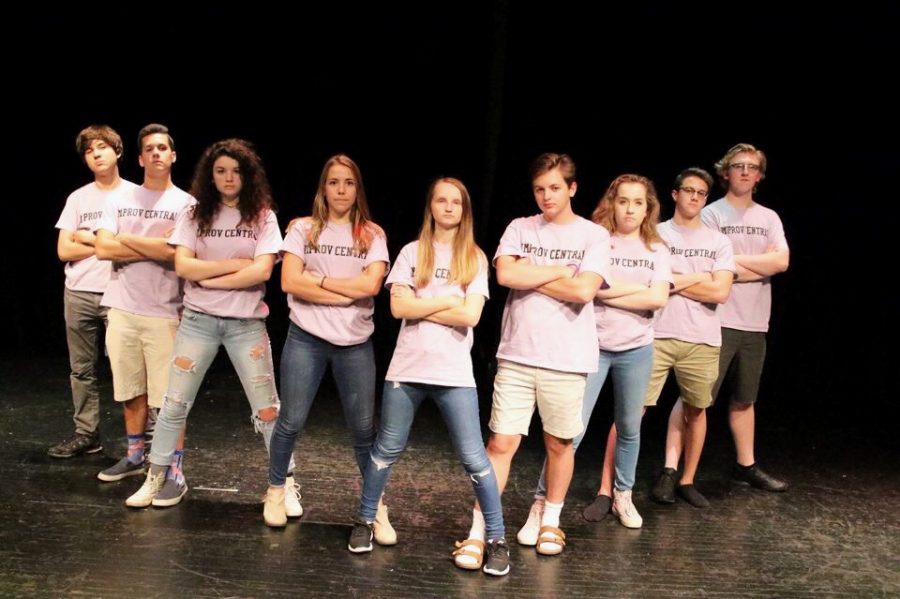 Nine best friends stand in a line as they introduce themselves to their director and an empty auditorium that, in a mere day, will be packed to the aisles with audience members looking to join in on the team’s connection for just a little while.

Practicing three or so times a week every week over the summer starting in mid-June, the team has had time to get to know each other and work on their group interaction simply by being around each other and making an effort to open up.

Senior Katie Hicks, who has been a part of FHC’s improv show since her sophomore year, thinks that while this will be her last improv show, it may quite possibly be her best.

“I do think we bonded better than last year,” Katie said. “We started off this season with a week of bonding activities without improv, just being together; [I think] that really helped. With improv, the closer you get to your team, the funnier your scenes are going to turn out. Since we bonded, our scenes have become better because of that.”

Entering his second year on Improv Central, junior Mark Kemp believes that over the summer, the team grew more cohesive and adopted a team synergy that made way for excellent scene work.

“We’re going to have to trust each other a lot,” Mark said. “To have the courage to take a scene in a bold direction, you have to be confident in the other person that they’ll go along with it and support the scene so it doesn’t fall.”

A widely known rule amongst Improv Central is that everyone is a star. No single person has a spotlight; the team works as a unit, and everyone has each other’s backs.

As improv does not have written lines and every word said in the show is born in that moment, mistakes happen sometimes.

Improv director John Donovan believes these mistakes are potentially a gift for something great to happen if the team works together well enough.

“The most important part of improv is teamwork and adapting,” junior Parker David said. “We do it well through working together and figuring it out. Connect in a scene, give a gift, and help them. It’s teamwork; that’s all it is.”

A cast member might not know what to say, but the group mentality and capability of working together saves them. Another person will swoop in and assist them the way any of them would for anyone else on the team.

“We’re just a bunch of goons who bond together really well, enjoy hanging out with each other, and love each other’s presence and being onstage with each other,” two year Improv Central team member senior Ellie Matelic said. “We’ve learned to make sure we’re helping each other out on the stage. I feel like we’re all really accepting of each other’s ideas whenever someone brings a new scene up. We all just go with it even if it’s the weirdest possible thing.”

Every individual on the improv team has become better at letting their guard down and becoming more in sync with the people surrounding them.

They trust each other and have connected in a way that few extracurriculars can replicate.

“They’re growing in friendship, community, and together as people toward this cast. They’ve truly gone from me to we,” Donovan said. “It’s so easy to think about what you’re going to do, but in reality, it’s “What are we going to do?a�� If I don’t know, someone else is going to help me. If they don’t know, I’m going to help them. It’s overcoming that fear, and there’s certainly a courage that comes with it. Growing into teamwork, there’s a confidencea�� a confidence in knowing that someone truly has your back.”

Improv Central is comprised of multiple kids from all different places in life who have come together and become something more than themselves.

For each of them, this experience has changed who they are as people on a deep level.

Whether learning how to be okay with constant changing like junior Gretchen Shull or becoming a better leader offstage like senior Matt Wilson, every improv team member agrees that they have learned something new and important while on their journey to Saturday’s show.

“I’ve gotten a lot less sensitive to being awkward around people; it’s not really a thing that happens anymore,” senior Noah Bosch said. “I’m able to be myself onstage, which I’m not normally able to do.”

Confidence is something all cast members have worked with in their careers as improvers’ confidence in themselves, their abilities, their surroundings, and other people. Having faith in one’s self is a game-changer in the improv world.

“I’ve learned how to be friends with people,” junior Callum Ovens said. “Before, I was pretty antisocial; I didn’t get other people. But now, I feel like I can make connections easier; I’m more fun to be around; I am a better person.”

Learning to be quick on the toes and take everything as it comes makes way for life lessons just as well.

“It has made me a more “go with the flowa�� type of person,” senior Hannah Kuhlmann said. “Improv, in a way, is like life. You never know what is going to be thrown at you or what is going to happen later, you just have to go through all of the struggles of making a scene. I really think it has helped me get through [problems in life].”

The Improv Central show, with its content entirely created by the cast, will take place Saturday, Sept. 30, at 7:33 p.m. in the FHC auditorium.

Every member looks forward to seeing the audience and their reactions to how hard they have worked throughout the entirety of the summer and school year.