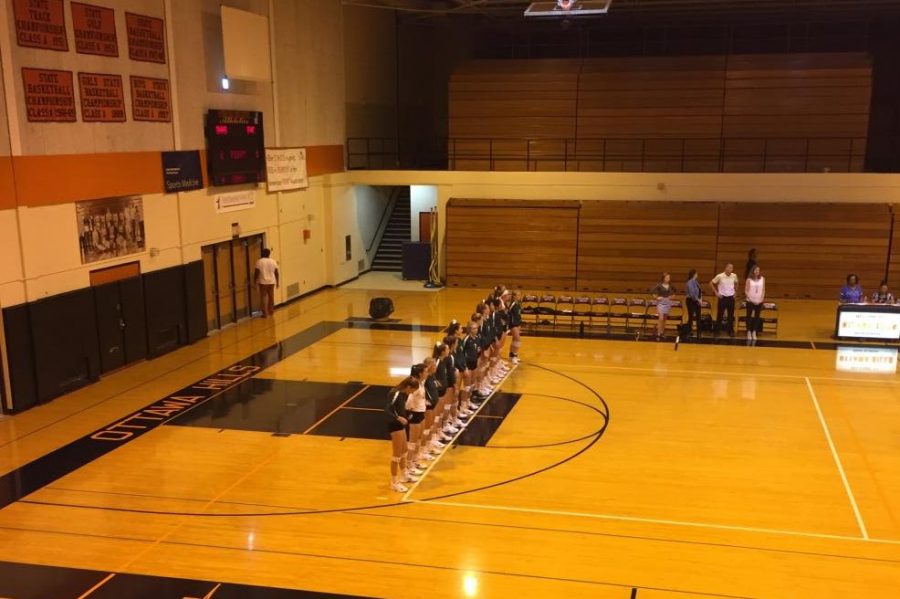 Tuesday night at the home of the Ottawa Hills Bengals, the FHC girls varsity volleyball team would fight hard for a win to put themselves 3-3 in conference play, leaving their opponents gym with a 3-0 victory.

Right from the get go, the game was back and forth but the Bengals managed to pull ahead at 7-3, going on a four point run. Junior Katrina Bodkins ended the run with two consecutive kills, giving the Rangers two points, along with a block from senior captain Emma Beck to get three points back. The Rangers would later earn another four consecutive points with kills from senior Kendall Gardner and junior Caileigh Treash. Alongside this, junior Katie McClure would get the team two aces to put them up 11-9 and force the Bengals to use a timeout. Despite the small cushion by the three ladies, the Bengals would get back into the game, earning three consecutive points coming out of the timeout. As the game continued, the back and forth scoring started up once again. After a hitting error from the Bengals, the Rangers would earn another four consecutive points with kills from Kendall and Emma and an ace from junior Kate Ryan to put them up 23-17. They would win the game after two violations from the Bengals, 25-18.

The second game started similarly with a score of 1-1, but a very controversial call by the referees gave the Bengals a point to put them up 2-1. Despite the odd call, the Rangers would bounce back with a block from Morgan Tomaszewski, a kill from Katrina, and a hitting error by the Bengals to give them three points and a lead of 4-2. The Bengals struck back for three points as well, putting themselves up 5-4. Katie then aced the Bengals twice to take back the lead at 10-9. Likewise, senior Audrey Tubbs served two aces. A kill from Kendall gave them a scoring run of four and a minute break when the Bengals called a timeout, they were ahead 18-16. Coming out of the timeout, the Bengals got two points back right away. Despite the small comeback, the ladies would earn six consecutive points; a kill from freshman Julia Bouma, a kill and an ace from freshman Morghan Tilton, and two kills from Emma, giving them 24 points to Ottawa Hills’ 18. Once again a violation from the Bengals would seal the deal for the Rangers.

Game three started off better for the Rangers as they got out to a 4-1 lead. Although the game was looking to be a win for the team, Ottawa Hills would earn themselves six consecutive points to put them back into the game. Following this, the Rangers then obtained two runs, a streak of four points and a streak of five. The first of which came about with kills from Julia, Katrina, and Emma and another ace for Audrey. The second with three kills from Katrina and two errors from the Bengals. FHC earned yet another five point run with two kills from Julia, a block from Caileigh, and an ace from junior Katherine Fowler to make the score 19-11. The last portion of the game was once again back and forth until a service error from the Bengals gave the Rangers the win at 25-19.