Popping the bubble #3: Vegas, another travel ban, violence in Catalonia, and more 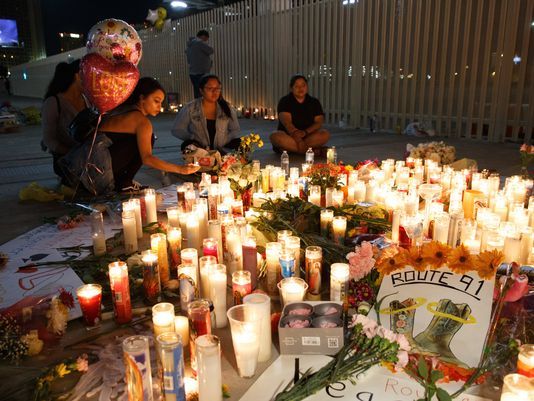 The nation has once again been hit with harrowing tragedy. But this time feels a little different. Something about such a catastrophic calamity executed by just another American rather than the forces of nature is heartbreakingly horrid and repulsive. The feeling of staring at the TV, dazed and numb, as yet another senseless act of violence unfolds before me is horrifyingly familiar.

However, as hard as it is to drag our minds away from Vegas, a lot did happen in the past two weeks…

Catalonia is the northeastern region of Spain. This region has a long history of clashes with the Spain central government (the overarching establishment that governs the many regions of Spain). Catalans have always felt different from the rest of the country, especially since dictator Francisco Franco suppressed Catalonia’s language and culture for decades. Additionally, Catalonia has been requesting autonomy and tax exemption (Catalonia is one of the richest regions and pays much more in taxes than they receive in benefits) for years to little avail.

These frustrations have culminated into yet another referendum for independence, as initiated by a 2015 vote. Several referendums have occurred in the past, and Barcelona has had rallies for independence for years.

In the days leading up to the vote, the Spain central government made their opposition to the vote and Catalan independence glaringly clear. In fact, on September 20, the Military National Police of Spain raided several government and private buildings in Catalonia in an attempt to stop the referendum.

Nevertheless, voting day rolled around on Oct. 1. The vote was plagued with violence and chaos, as the national government was still attempting to stop the vote. Police crowded the streets and poll locations, and refused to shy away from violence. Despite the Spanish national government’s savage efforts to stifle the people of Catalonia, almost 43% of Catalans managed to vote. Reportedly, over 800 Catalans were injured; the brutality was met with widespread criticism.

In the end, Catalonia voted in favor of independence. But, the Spain central government has declared this vote unconstitutional and illegal. As protests erupt over Spain’s use of force and the issue of independence itself, the fate of Catalonia remains shaky. Only time will tell.

Recently, we learned that Trump has taken a third stab at his infamous travel ban. The new and improved list of countries that the ban applies to is as follows: Chad, Iran, Libya, North Korea, Syria, Yemen, Somalia, and Venezuela. Basically, Sudan has been removed while North Korea and Venezuela are new editions.

The intensity of the ban’s restrictions varies from country to country:

Chad, Yemen, and Libya – All immigration suspended; some business and tourist visas of non-immigrants will be prohibited also.

Somalia – All immigration suspended, and non-immigrants will experience elevated screening and vetting requirements.

Iran – All non-diplomatic entry suspended, though valid student and exchange visitor visas will be allowed on condition of increased screening and vetting requirements.

Venezuela – Certain government officials and their families on tourist and business visas are suspended.

Furthermore, this version of the ban allows U.S. consulates and embassies to waive the ban on specific cases if the ban causes “undue hardship.”

As for the people’s response, supporters applaud the tough restrictions while others argue that this is still essentially a “Muslim ban,” and North Korea and Venezuela were haphazardly thrown in to distract from this. Nonetheless, this announcement has still been met with less overt opposition than Trump’s first attempts.

In a huge development for Saudi Arabia, the Saudi Arabian king issued a decree stating that starting on June 24, 2018, women will finally be allowed to drive. As a nation that severely oppresses women, this is huge progress for the country.

This is an especially big win considering how long Saudi Arabian women have sought this right. In 1990, the first ever protest took place, where 47 incredibly brave women took to the roads in the driver’s seat and were subsequently all arrested. These women’s original courage led to several protests over the years as the fight for the right to drive continued

Lastly, of course, this past Sunday night, Stephen Paddock opened fire at around 10 p.m. on a country music festival in Las Vegas. Paddock reportedly fired on and off for nine to eleven minutes, snatching 58 lives and injuring around 500.

Paddock had prepared for his devastating crime by checking out the hotel room from which he shot from, setting up cameras in and outside the room, and stocking up his weapon arsenal. Police later recovered 47 guns from the hotel room and Paddock’s two Nevada houses.

Paddock’s gunfire ceased when security guards of the hotel momentarily interrupted his attack. The guards notified police, and by the time police made their way to the room, they found Paddock dead.

As of now, authorities believe that Paddock took his own life, that he acted alone, and that the crime has no connection to any international terrorist groups (though ISIS claimed responsibility). Police still don’t know why Paddock set up cameras, and his motive remains unknown. The FBI and the U.S. Department of Homeland Security are in now in contact with Philipino authorities, as police are now looking into Paddock’s girlfriend- who was out of town in the Philipines at the time of the attack- and the $100,000 Paddock wired to the Philippines.

58 Americans have been ruthlessly murdered, around 500 injured, and thousands of lives forever changed. The urge for answers is natural, but let’s try to focus on the fallen victims and the real heroes of this story: the first responders, the cops, and the ordinary citizens who, in the face of utter peril, threw aside their own fears to help those around them at the time of the attack.

The saddest part of it all is that this exact nightmare has happened far too many times and will probably continue to happen. With an aching heart, I pray that 58 lives will not have been taken in vain– that maybe, just maybe, we’ll start to see some change.