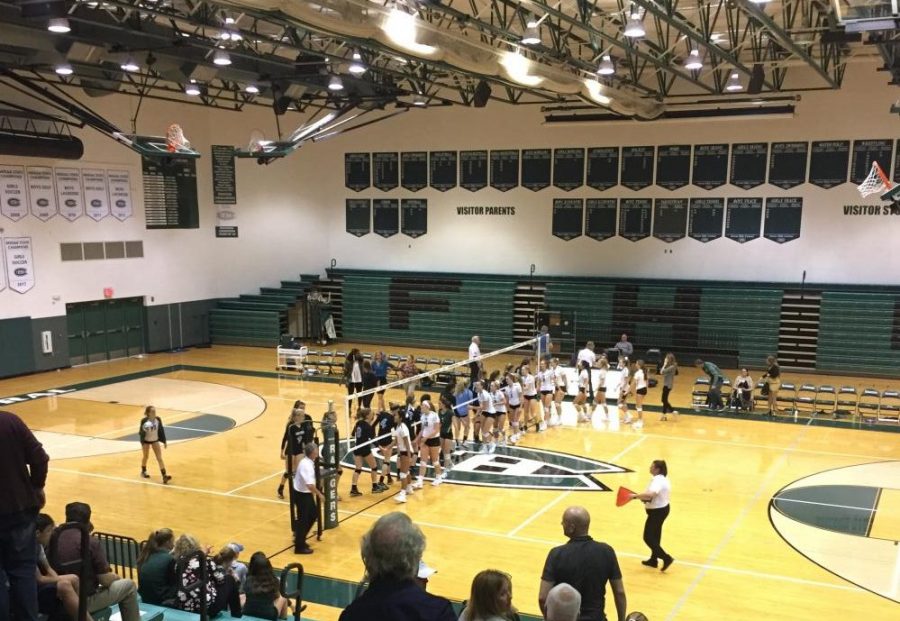 FHC and rival FHN played an entertaining set of games Thursday evening. While the Rangers worked hard throughout the game it still was not enough to defeat the conference leaders, losing the match 3-0.

Early on in set one, Northern had quite the error bug, putting the Rangers up 3-0 and taking a time out. A key offensive point by the Rangers was courtesy of a kill by junior Katrina Bodkins to put the score 7-5. With the lead in the hands of the Rangers, they were playing with a lot of confidence. Katrina was able to spike again, giving them yet another point. Unfortunately, three consecutive hitting errors forced Shields to take a time out.

After the timeout, the Rangers had started to lose their composure, letting the Huskies go on a 7-2 run to make it 15-10 in the favor of FHN. Northern used their large presence at the net to continuously gain points, leading to the second and final time out from Shields at 20-14. The Rangers obtained two more points after the time out with an error from Northern and a kill once again from Katrina. Northern obtained the last five points to end it 25-16.

“We showed up this time around [to win],” Shields said. “The girls played with more confidence and we reduced our unforced errors.”

FHC fell behind 3-0 in the second set much like Northern in the first, but after four consecutive errors by Northern, they were up 4-3. After trading points back and forth, the Rangers were finally able to establish a very small lead of one at 10-9. Senior Kendall Gardner then earned the team a kill to put them up 11-9. She later earned them another to put it 12-11. Likewise to set one, Northern was able to gain continuous points, going on a 9-1 run, making it 20-13 in favor of the away team. The run was ended by a service error from the Huskies, but kept the momentum once again directly with a score of 22-14. Junior Katie McClure was able to get her first ace of the night along with another kill from Kendall before the Huskies would end it 25-16.

Northern came out in set three and established absolute dominance, giving themselves a 11-0 lead from the get go. They again used their large presence at the net to shutout the Rangers for the first half of the set. The first point by the Rangers was earned by Katrina who again got a kill to end the massive scoring run. Kendall would get another kill for the team to put it 15-3. Northern would earn two more points, forcing Shields to take her second time out. Afterwards, the Rangers would finally earn three consecutive points with another kill from Kendall and two errors from the Huskies. The opposing team would go on a 8-5 run to finish out the third and final game 25-11.

“[In set three] we struggled with our serve receive and FHN capitalized on it.” Shields said. “When you dig yourself in a hole from the beginning it’s hard to recover.”