FHC jazz band: the hidden gem of our school 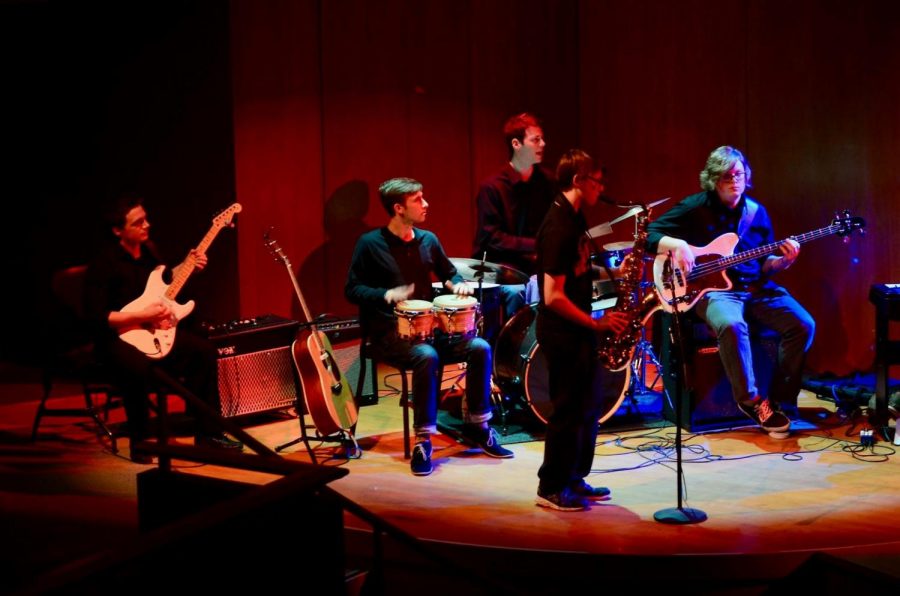 When people think of FHC’s band, they think of the highly regarded marching program: halftime performances, fifth quarter drumline cadences, and homecoming parades. Many overlook other FHC groups that have just as much talent and prestige.

Welcome to the jazz band.

“[Playing] in the jazz band was eye-opening,” senior Connor Stadler said. “Jazz is such a different type of music, and it really just takes one year of [being in that class] and playing jazz [to understand what it’s like].”

Like most music classes, FHC’s jazz band consists of a menagerie of veterans and newcomers who share a common passion for music. Jazz band stands out, however, due to its unique style and flexible class content.

“I love jazz because of its parallels to classical music, which I already practice on the piano,” senior Anthony Viola said. “It’s groovy, though.”

For those who discovered their interest early on, jazz band provided a platform to kickstart their pursuit of music.

“I [chose to] play saxophone [in seventh grade] so that I could play jazz,” senior Scott Hadley said.

Others further their love for jazz with private classes outside of FHC, thus bringing even more talent into the school’s jazz program.

“[Jazz professionals] are very trained in their music,” senior Jared Johnson said. “I study with a jazz musician, and every lesson is [something] intense and new.”

Scott, Anthony, and Jared, who have all been in jazz band for four years, witnessed firsthand how the program has changed with new band directors, graduating seniors, and incoming members.

“We lost a lot of strong seniors last year,” Scott said. “I’m confident that our program will [continue to grow] though.”

FHC’s jazz band allows each student plenty of room to mature as a musician.

“Our goal this year is to maintain the level of excellence we have shown in previous years,” Connor said. “And so far, we have been doing that.”

Connor, who joined jazz his junior year, quickly discovered how different the environment was compared to concert band.

“[You’re in this class] with these people who have [taken] four years of jazz band who are much better than you,” Connor said. “[On the first day], I realized just how bad [I] actually was at [playing] trumpet.”

Connor credits this to the amount of talent he sees in jazz players.

“There are so many awesome players, and you realize how awful you are,” Connor said. “But it helps you get better. I improved more [at trumpet] in one year of jazz band than I have in three years of concert band.”

FHC’s jazz class waved goodbye to band director Rob Ash at the end of last year, but they are now welcoming a new face: Laura Zilhaver.

“Mr. Ash was very extensively trained in jazz,” Anthony said. “And Ms. Zilhaver brings a new style, but she is [mixing] well with the class. She teaches a lot of techniques [formally], which is nice.”

Jazz band is preparing to perform at Bandtasia next week, where the marching band will feature its halftime show music.

“Ms. Zilhaver wanted us to play music that fits with [the marching theme], which is “British Invasion,a��” Connor said. “So we are playing “Can’t Buy Me Love,a�� “Green Onions,a�� and “Autumn Leaves.a�� Then, we are improvising for a bit.”

“Jazz festivals are [a great opportunity] to meet different musicians,” Connor said. “At MSU, you get to work with college professors who [specialize] in your instrument, so I got to work with Juilliard trumpet players.”

These festivals are a rare chance to completely immerse in jazz for a day, and FHC students look forward to the trips all year.

“It was amazing to work with musicians who want to pass down their passion to students,” Jared said.

“I got to learn with these range extension sheets that MSU uses to extend [their trumpet range],” Connor said. “It’s a workshop with fundamental learning for [high-skill] playing.”

At the end of each festival, students are left with new skills, knowledge, and passion to take with them back to FHC.

“My favorite part about jazz is the yazz,” Connor said. “It’s like jazz but pronounced with a “ya�� sound at the beginning. That’s what [it’s all] about.”