This year’s fall play, Noises Off, is expected to please 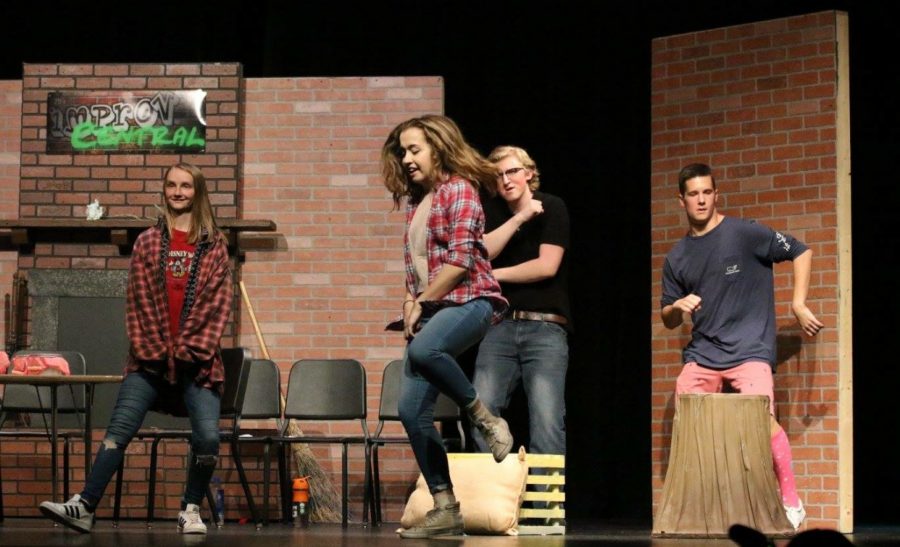 The lights dimmed. The crowd hushed. A spotlight hit the first actor on stage. The lines, perfectly delivered, began to flow smoothly. For senior Katie Hicks, this is something that happens regularly.

Ever since Katie was little, she has always been into theater. Now, as a senior, she is the star of a play being put on at FHC: Noises Off.

Noises Off is a play in which the actors take on two roles: onstage and off stage. The actors will be getting ready for dress rehearsal and their final performance of a production within this play called Nothing On.

During Noises Off, Katie will be taking on the role of Dotty Otley- a ditzy but successful actress- playing a housekeeper in Nothing On.

“I wanted to audition for Noises Off because I love to perform, and I jump at any opportunity to do it,” Katie said.

Katie’s life is not only busy with school, but a crazy rehearsal schedule takes up most of her time after school every day.

Two hours are put in by each cast member almost every day after school, working on not only blocking but line memorization. When blocking is involved in rehearsals, the cast acts out their scene while adding movements and little bits of busy work on stage.

“[Blocking] is extremely important in this show because everything is so fast-paced,” Katie said. “Timing is everything.”

With stage direction, the cast learns how to move swiftly to their next location on their line or another person’s line that cues them to move.

With a strong cast like this, direction should not be hard, but theater director and English teacher Robbin DeMeester is working hard with her team to ensure that this is a good show.

“You’re only as good as the team you bring in to help you [make sure the show runs smoothly],” DeMeester said.

DeMeester’s team plays a very important role themselves, but all their work is almost un-noticed and off stage. They work hard on costumes, makeup, stage direction, and blocking.

This team DeMeester has assembled has come from the community, but they all come together to make the show great.

“[My team] makes me look ten times better than I could ever look alone,” DeMeester said.

Not only is there a crew that helps DeMeester on stage, but someone has to be the silent player in the game: the set crew who spends hours and hours working to build something incredible. Senior Jared Israels and a group of nine other students help make that possible.

During his time on set crew so far, Jared and the set team have made incredible process. Right now, they are working on the heavy lifting part of building, which is moving things in and out of the scene shop.

“[Most of the handy work] is screwing, lifting, and the heavy lifting we have,” Jared said. “We are, however, early in production, so I expect [the workload] to change.”

The sketching for what this team is building was put together by history teacher and set crew head Laura Stiles, who worked closely with DeMeester’s team to ensure their vision comes to life.

“Our set crew is awesome this year,” Stiles said. “The set is really challenging, and they’ve already completed the hardest part.”

The set crew works a few days a week, around two hours every day. Taking apart and rebuilding things is an everyday occurrence for Stiles’ team. Once this team gets everything put together the way they envisioned, they can begin the painting process. Once the painting process has ended, the set crew goes to work on stage to assemble the set a week before the show so the cast can rehearse with their brand new set.

“[So far] the set is coming along great,” Jared said. “Everyone is working hard and extremely well together.”

All four teams- the crew, set crew, cast, and directing team- have already started working hard on their own parts to make sure the show will be smooth sailing.

“This is definitely the hardest show I’ve ever done,” Katie said. “I love how it’s pushing me to be a better actress.”