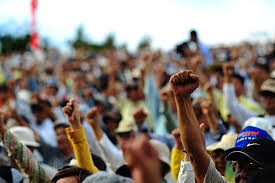 Most people are raised with a certain set of beliefs that have been instilled in them by their parents. It’s not uncommon for teens to be extremely opinionated, but these opinions are usually in accordance to or direct opposite what their parents believe. Personal beliefs, political views, and general opinions should be constructed through education and personal experience.

Educate yourself. Learn about the country you live in, and the world you live in. Learn about politics and what’s happening around you. This knowledge will not only better you as a person, but it’ll let you find a place in the world – there are surely like-minded people out there, and finding people with similar beliefs is an uplifting and encouraging experience.

Blind faith isn’t any better than having no opinion at all. Don’t just believe what you’ve been raised to believe unless you’ve made that decision for yourself. Think about your values and beliefs, and ask yourself if you formed those yourself or let someone make them for you. Whether it’s religion, political views, or anything else, forming your own views and opinions based on personal beliefs is something that everyone should do.

There’s one obvious example of why people should form their own opinions: voting. My peers and I will be able to vote in about a year, and anyone and everyone who can vote should. Researching the candidates and voting with an educated opinion is what helps make our country a better place to live, and frankly, ignoring this right is idiotic. On top of this, take action if you’re not content with something. The right to protest exists for a reason, and it should be exercised when necessary.

Take some time to teach yourself. Be open to different opinions. Debate. Figure out what resonates with you and what you believe in, and stand by those beliefs.