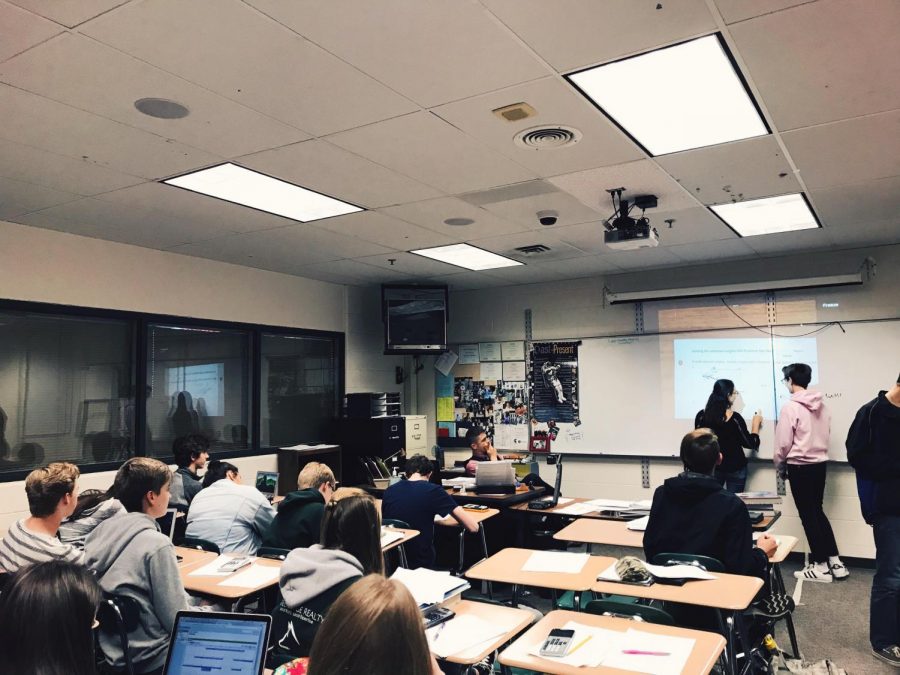 Sophomore Tommy Hendricks sits attentively at his desk, the gears in his brain beginning to turn. It’s a Tuesday afternoon in Room 223, and the Math Club is working proactively to solve problems of high difficulty.

“[The difficulty] depends on what you study and what you like,” Tommy said. “It also depends on how far you are in math. Some of the concepts are beyond calculus, but it varies from creative thinking to basic algebra.”

Introduced by math teacher Daniel Garbowitz, the Math Club was brought to FHC as a way to expose students to higher-level math before leaving high school. However, a lot of these students are already advanced in math, and the Math Club is just another outlet for them to further their skills.

“Some of these kids come from my classes, but most of these kids are in [AP] Calculus,” Garbowitz said. “I’d like to try to expand the club beyond that; it’s not a requirement to take high-level math classes [to participate].”

Math Club incorporates skills from all levels of math, but the problem-solving skills that are necessary to correctly solve each problem extend into the collegiate level at times.

Sophomore Eli Logan is embracing these mental, mathematical challenges he’s being faced with.

“The problems Mr. Garbowitz poses to us aren’t straightforward or simple like school math problems,” Eli said. “There’s much more effort and thinking needed to solve these type of questions.”

These students are not simply solving difficult problems to solve them; they are preparing for a rigorous math competition at Grand Rapids Community College (GRCC) this March.

Events in this competition range from individual events, team events, and even relays. Teams consist of six students each, and teamwork is necessary to succeed.

Tommy is excited to experience these competitions with other members.

“I don’t really know what [competitions] look like because I’ve never been to one,” Tommy said, “but I plan on having fun no matter what.”

Garbowitz hopes to take two teams to the GRCC competition. Currently, there are about ten members, but more are encouraged to join.

“[Students] should join for sure,” Tommy said. “It’s fun, and it’s a good use of your time. It’s better than sitting around on your couch.

Eli also encourages his peers to join, especially with all the benefits.

“It prepares you for math competitions, and it can help with school homework,” Eli said. “It also looks good on [college] transcripts.”

Garbowitz hopes to see the club grow, and eventually establish an official “chapter” here at FHC.

“We started Math Club in hopes of drawing some kids in after school to learn more about types of math that they might not see in high school, and introduce them to competitive math as well,” Garbowitz said. “So far, the kids I’ve seen are really passionate about the content.”

Co-founder and discussions leader of the club, sophomore Yuyuan Luo, is one of these passionate students.

“We are a group of humans passionate about the subject,” Yuyuan said. “While it may not have much application to the ‘real world,’ it’s fun and interesting, and we discuss it for pure pleasure. I would encourage everyone to at least think about joining because the level of passion here is worth experiencing, even if you think you hate math. I thought I hated math before being really exposed to the variety of interesting ideas and theories – we are always welcoming to new members.”