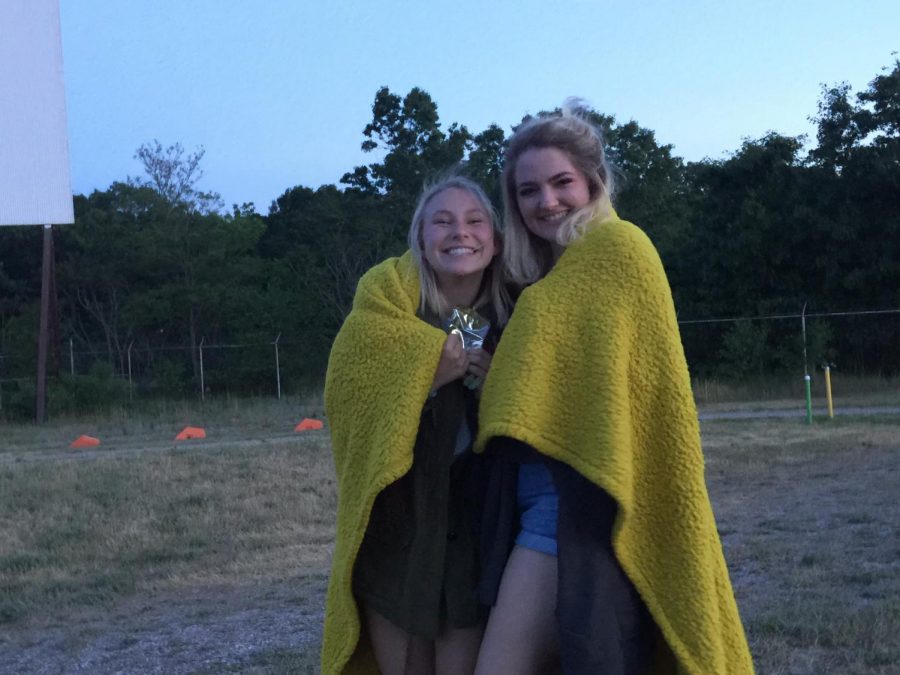 Thanks to the boundless vessel of information that is the Internet, exploring the enticing black hole of conspiracy theories has become a widespread obsession for many teenagers. Youtubers and web creators alike have popularized the phenomenon of this subject– this certainly holds true for senior Caroline Whyte and junior Abby Stead.

Taking deep dives into the fascinating speculations became a frequent pastime for the two friends.

“[Conspiracy theories] were just kind of a funny thing we always chatted about,” Abby said.

The duo’s attraction to conspiracy theories was what eventually engendered the idea to establish a club dedicated to the topic.

“We were joking around one day,” Caroline said, “and we were writing some conspiracies on the board, just trying to work things out as a joke completely. But we thought it was a really fun idea. We were like, “What if we got together with a bunch of friends and just talked about these things and saw where it went?a�� Then we were like, “Oh– conspiracy club!a�� So it was kind of joke, but then we wanted to make it a real thing just because it’d be fun.”

From there, the two got to work getting the club approved by the administration. As of this morning, the club has been officially approved; the first meeting is Nov 14.

The two friends are excitedly anticipating the commencement of the club; they invite any and all to attend.

“Basically, it’s going to be a friendly gathering just to bring people together,” Caroline said. “We will have a different conspiracy- or a couple- each week. And it’s all friendly; it’s not like we’re coming for the government or any organization. Sometimes, we don’t even believe in [the theories]; it’s just a nice [way] to open for discussion to think about things and get together with people that you normally wouldn’t be able to talk to.”

Abby is eager to provide a club for those who wish to branch out and meet other kids but are perhaps nervous to delve into the many clubs at our school.

“Caroline and I really wanted to have a club where you didn’t need a specific skill set to do it,” Abby said. “[One where] you could just come, talk to people, and be social. For me, that’s kind of difficult. It was nerve-wracking to go to any clubs last year when I started doing that. So I thought maybe underclassmen might like [this club]. Plus, I feel like conspiracy theories and all that are a trend right now; everyone wants to talk about them.”

Judging from the feedback Abby has received, there is sure to be a crowd at the first meeting.

“From everyone that I’ve talked to about it, [students are] freaking out [about the club],” Abby said. “They’re like, “I’m going to go; it’s going to be great.a�� So I feel like it’ll be a good turnout, especially juniors apparently because that’s who I mostly talk to. So yeah, I think it’ll be good because I think everybody’s really interested in that kind of ‘creepy’ stuff right now.”

Caroline, too, has observed an enthusiastic response from her peers.

“I’ve had approximately ten people tell me [they’re interested in the club] because I’ve brought it up in choir,” Caroline said, “and a lot of people seemed to be interested in it– and in other classes too. So I think [the club] will be received well.”

Based on the reactions she’s been receiving from a variety of kids, Caroline anticipates that the club will act as an immense uniting force for the student body.

“Something that’s cool about the club [is that] when we’ve been mentioning it to people, a lot of people that we wouldn’t usually talk to as much are really interested in it,” Caroline said. “So it’s kind of cool in that sense.”

In general, both Abby and Caroline hope to create a club that positively contributes to FHC.

“I think the main goal for me is to make a place where everyone can come and feel included and talk about funny, crazy, and interesting conspiracy theories,” Abby said.