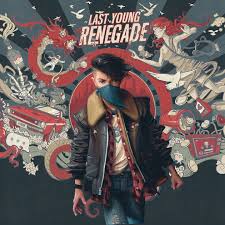 For Fans of Fall Out Boy and Panic! At The Disco

Sometimes, it can be difficult to come back to life after digging your own grave. If you are lucky enough to get out of that hole, you often can come back stronger and better than ever. When I heard All Time Low’s last album, Future Hearts, I was left in a state of inevitable disappointment. The album was not well done and could not compare to their other albums. However, upon listening to their newest album, Last Young Renegade, I was very glad to realize that one of my favorite bands was able to successfully shift into a new style of music and overcome the downfall of their last album.

All Time Low is a band from Baltimore, Maryland. After being a pop-punk band for the past twelve years, they have decided to transition into a more radio-friendly, alternative rock band. With the release of their last album, Future Hearts, they began this shift into a more pop sound. However, this album was met with rather harsh reviews from critics and fans. In order to continue forward with this change of sound, they chose to switch record labels to meet their new goals. Last Young Renegade is their debut on the new record label, Fueled by Ramen. This shift of record labels was definitely the right choice.

The album opens strong with the title track “Last Young Renegade.” This song has traces of 80s nostalgia present. The presence of the percussion and guitar adds to this 80s rock element. As the song plays, you are able to see a movie scene playing in your head due to the lyrics.

The second track, “Drugs and Candy,” is also another solid track. This track has a more electronic instrumental, but it is not overdone. The lyrical and vocals also add greatness to this song. But, I do believe there could be more of a rock influence in the track. The breakdown at the chorus provides this rock presence, but it could be more present in the rest of the track.

The build-up provided by the first few tracks is quickly lost upon reaching “Dirty Laundry.” I believe that this song lacks the spark that could make it as good as the rest of the album. I find the vocals and instrumental to be a bit underwhelming. The lyrics are very good, but they are lost by the overproduced synth and vocals.

The instrumental of this track starts off rather weak, but it continues to build throughout the song, Due to this build up, I find that the last 50 seconds are the best part of the song. At this point, the instrumental and vocals shift to pack more of a punch than provided earlier.

Even though there is a lack of momentum, “Good Times” quickly returns the pace back to the album. These lyrics are essential to any high schooler ready to move on to college. The lyrics bring waves of memories from growing up in your hometown. It is a very touching song. The instrumental also adds to the nostalgic and happy feelings.

When I first saw the track “Nice2KnoU,” I was immediately turned away by the title itself. However, this song is a hidden gem. It is impossible to ignore the opening seconds of this track. The instrumental opening is filled with a strong rhythmic section of guitar and drums. This track also adds to the overall theme of nostalgia present in the album.

The album quickly transitions into songs that contain more serious topics in the lyrics. I can say with confidence that “Life Of The Party” is one of the best songs ever produced by All Time Low. If All Time Low is still contemplating different ways to switch into an electronic sound, this is the way to go. This track is the most unique one on the album; it has traces of both rock and electronic genres. But, it manages to expertly blend the sounds without losing the best aspects of either. The lyrics and vocals also add to the expertise of the track. Lead singer Alex Gaskarth’s vocals are pushed to the extremes. He manages to hit a range of both high and low notes with ease. Aside from the vocals, the lyrics are exceptional. They are very raw and come from a place of strong emotions.

“Nightmares” is also another song that lyrically is very deep. This song contains some of the best lyrics All Time Low has ever written. However, the instrumental is a bit boring. I find this song to be like a book you try to read but ends up being too average– so it sits on your shelf without being re-read.

The final three tracks begin to go back to a more upbeat pace. “Ground Control” is a wonderful track that features a surprising collaboration with Tegan and Sara. I believe that All Time Low has learned from their mistakes made on the last album. On the last album, the collaborations were forced and very awkward. However, this album’s collaboration on this track is seamless.

“Dark Side Of Your Room” is another very solid track on this album. It still combines both electronic and rock in the instrumental, and it is not in a forced manner. The lyrics also add more memories and nostalgia to the album as a whole.

After going through this pretty extraordinary comeback album, I find the final track, “Afterglow,” to be a bit underdone. For some reason, I do not find the instrumental or lyrics to be up to par with the rest of the album. They are a bit more basic and do not have a distinct identity like the other tracks. However, I am able to overlook this track and still find the album as a whole to be very successful.

I am very pleased with All Time Low’s 7th release. It has managed to crush all expectations I had set by the last album. I am hopeful for the future of this band on their new record label. I believe that All Time Low did not just come out of the grave they dug for themselves, but they came back to life, too.