Color Guard is a hardworking and tight-knit family

Sophomore Iman Hearing swings her flags gracefully over her shoulder and takes her place in line. Chin lifted with a smile, she marches down to the football field in front of the band as one of six members of the Color Guard.

“[In Color Guard], I get to go out and show people what I can do,” said Iman, who has been on the team for one year. “That’s really fun for me.”

Color Guard is the visuals of the band, hence why they are sometimes called the Visual Unit. They perform with many props, including flags, and their routines often have a bit of dance in them. Every time the marching band performs, the Color Guard is right there with them. They march with the band during pregame, perform at halftime, and even perform at Bandtasia.

The Color Guard girls come from a wide range of backgrounds not necessarily related to the skills needed for the unit. Only about half of the girls on the team had any kind of dance or Color Guard background before joining the team.

“I didn’t have anything relating to [dance or Color Guard] in my background,” Iman said.

Irrespective of whether a team member had a dance background or experience using flags, each and every member started with a blank canvas. Color Guard is more than dance or using a flag. They all had to pick up new skills to dance while moving their flags in unison with their teammates. Many of the girls who have never used a flag had to learn how to do the iconic flag tosses and spins at the Color Guard auditions.

“It wasn’t super hard to pick up or learn how to do,” Iman said.

But Color Guard is in no sense easy; it is tricky for the Color Guard to handle their props. Junior and co-captain Abby Stritzinger knows firsthand the difficulties with props.

“Someone got too close to me with their flag and actually hit my head,” said Abby, who has been on the team for three years. “It’s never fun when you get hit in the head with a flag.”

Along with the four different flags: one for pregame and each of the three songs played during halftime. Color Guardists work with costumes, which are also used as a kind of prop. They are dressed in all black, including a black skirt adorned with a red underside. The handmade skirts are only worn in the first two songs, and some of the choreography uses the skirts. Additionally, Abby wears a cape which she uses in her dance solo in the second song. Although, her dance isn’t her favorite part of the solo.

“My favorite part [of my solo] is the trumpet soloist [sophomore] Susan Toppen because we get to share a really important and fun moment together where she’s my music, and I get to be the visual for her solo,” Abby said. 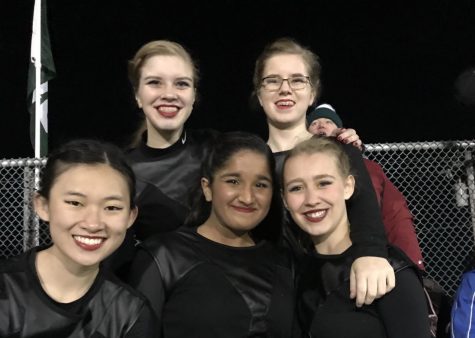 The girls of the Color Guard are very dedicated. Though to most people, this isn’t the first thing that strikes them when they hear “Color Guard.a�� These girls put in hours of work to make sure they look perfect on the field. They practice eight hours a week on top of all the extra practices with the band.

Senior and co-captain Francesca Duong is particularly proud of the team.

“When you hear about [Color Guard], it does sound kind of wimpy and not that great,” said Francesca, who also has been on the team for three years. “I don’t think people understand the hard work that goes into it.”

There are many factors that play into the Color Guard’s performance– factors that they try to perfect and master– such as the fact that each person’s timing needs to be spot-on in order for the visual to come across to the audience. To do so, everyone needs to be precise with their movement and do things in the correct manner. Tosses and spins can be messed up by something as little as grabbing the pole from on top instead of underneath.

“Sometimes it’s difficult to be exactly on time [and] match-up with everyone because everyone has to be precise and perfect,” Francesca said. “I think that when you do get to that moment, it’s a really awesome thing.”

The Color Guard is more than a few committed and hardworking girls. It is a tight-knit family of girls who share a passion for performing.

They spend so much time together that it would be hard for them to not become a family of sorts. In preparing for their performance, they meet and do hair and makeup together. These girls share stories and laughs while they apply and blend their yellow, pink, and purple smokey colors to their eyes. They have grown close while working together to braid each other’s hair for the show to assure that their look is identical. After performances, they wrap themselves up in blankets and chat on the bleachers while they watch the rest of the game on football game nights.

There are no divisions between grades either. The older and younger get along flawlessly. The upperclassmen act as mentors to the underclassmen, who benefit greatly from it.

“This year, we’ve had such a great team and everyone is super nice,” Francesca said. “We’re all just one happy family. I’m like a mom to the team. I love them so much; it’s really shaped who I am.”

Soon, Friday night will arrive and the stands will be filled with fans waiting for a break from the football game. Although Color Guard has preformed for the last time this season, this is the moment they spent hours preparing for, and this is the moment that unites them.

“It’s so nice to build it all up to that one moment, and you’re finally out there, and you’re not worrying about anything,” Francesca said. ” You’re just having fun and enjoying the experience.”