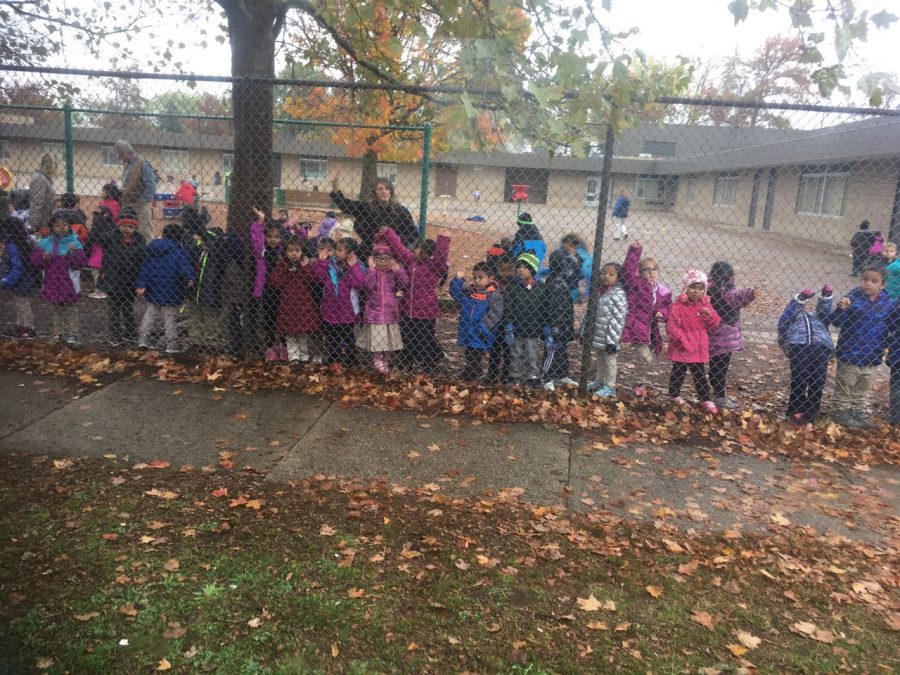 Sophomore Jordyn Carlson didn’t know the language. She struggled to properly express her ideas. The conversation with her new young friend was a challenge, but she tried to make it work.

“At first, I was kind of nervous,” Jordyn said. “I didn’t think I knew enough Spanish to communicate with the kids.”

On Thursday, Nov. 2, Jordyn and other students of Spanish teacher Carlos Silvestre’s Spanish 2 and 3 classes took a trip to Buchanan Elementary – a local school with less fortunate, bilingual children. Students spent some time playing games and hanging out with the kids but also practicing a language that is still new to them.

Each Spanish student, or pair of students, was assigned to one of the children from Buchanan Elementary. These students spoke primarily Spanish which made some communication difficult.

“My partner and I just started with some basic things,” Jordyn said. “Then we started piecing together some more of [what] we had learned in Spanish, making it more complex.”

For Jordyn and other students, this posed a challenge but became easier as time went on. As students interacted more frequently with their kid, they got to know them personally, creating a more comfortable environment for communication.

“Going in, I didn’t know what I was going to say,” Jordyn said. “As we kept talking, the words were practically flowing out of me. I couldn’t control what I was saying or what I wasn’t saying.”

For many students like Jordyn, this was their first time having a “real world experience” using their new language. It allows for students to either have more confidence in what they have learned or indicate that they need more work.

Another challenge many of the Spanish students faced was trying to get their kids to open up to them. Many of the young kids were shy and very nervous to speak to new faces, but once they opened up, it was a great experience.

Another part of this trip was a piece of community service.

Many of the students at Buchanan Elementary are from low-income families who sometimes have trouble affording things. With the winter season coming, all FHC students were asked to buy a winter jacket to give to the kids.

Many of the Buchanan kids had jackets that were old and beat up, so bringing the jackets in was greatly appreciated by the school and the kids.

“When we gave the kids their coats, their faces just lit up,” Jordyn said. “It was amazing,”

Sharing this experience with Jordyn was her partner, sophomore Rachel Nicholson.

“I thought it was a great experience,” Rachel said. “It was interesting speaking a language that isn’t your own.”

A struggle for Rachel was having her young kid know more of the language than her, making it difficult in some areas of communication.

“At some points, I would just smile and nod until I got the hang of it,” Rachel said. “It was a little scary.”

This trip allowed students to interact with a person who is fluent in the Spanish language, which was a challenge. In class, everyone is struggling, learning together, and taking it slowly. This situation, however, allowed for more on-the-spot and quick thinking.

“Instead of thinking about it and processing the verbs, you just have to do it and put it out there,” Rachel said.

For many of these students, this was their first time taking this trip to Buchanan. For Spanish teacher Carlos Silvestre, though, this was his eleventh year making this trip with his classes.

“When I started working here, I thought about how [I could] get my kids connected with the community outside Forest Hills,” Silvestre said. “I asked them what the needs of the kids were, and they talked about the jackets and winter gear, so that’s when we started doing it, and we have been doing it since then.”

This project, along with being a good real-world application of Spanish for these students, shows them this other world. It gives the students an opportunity to see that outside their tightly-knit world here in Forest Hills, there is a whole other world of people – different in age, language, and economic state.

Just because they are different doesn’t mean they care any less. Silvestre wants to show his students how to care for someone despite differences of any kind.

“I want [my students] to see their ability to care for someone that is not as close to us, such as our immediate friends or neighbors,” Silvestre said.

Silvestre wants his students to see that there is a whole world out there, and they can be out there to lend a helping hand.

During classes, many ask themselves why they’re there and when they would use what they’re learning in the real world. Now, for all these Spanish students, even if they don’t go into a career entailing Spanish, this trip showed them that what they have learned can be used for good.

“I want them to see that they don’t have to go to another country or continent to meet people who speak another language or just lend a hand,” Silvestre said. “And, to see that we can make connections at any level with adults, or even kids, because in the end, we are all one community.”