Students need to be more considerate 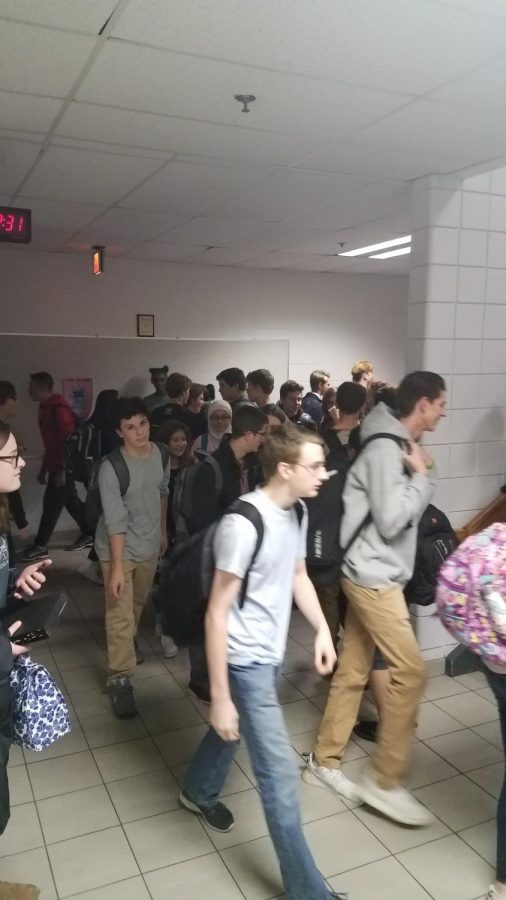 With such a short time on Earth, people tend to move quickly in order to experience everything the world has to offer. So many people speed through life; they want to experience all the joys available to them, and this often means forgetting about others. Everyone should enjoy life, but it should never be enjoyed selfishly. All this speeding and selfishness has come at a cost — a cost of consideration.

One of the most infamous examples of inconsideration this school has to offer occurs in the hallway.

The hallways are a chaotic, unpredictable torrent of bodies. If you stand in a big circle with friends, you create a narrowing of the passageway that significantly slows down traffic and can make getting from point A to point B incredibly frustrating. Instead of standing in the middle of the hall to chat, you should move to the side and out of the way of traffic. Make sure to avoid standing in front of a doorway, too. Most people want to walk into class without having to awkwardly shimmy around you muttering, “excuse me.”

There’s nothing wrong with wanting to stop and chat with friends between classes, but you have to realize that where you’re idling others are inconvenienced. Don’t be surprised when you get shoved from behind when people try to squeeze past your inconsiderate self. If you’re going to do that anyway, at least make an effort to make your group as compact as possible.

Furthermore, if you’re going to walk and talk with friends as you head to class, don’t go half a mile an hour. Get to your destination and move to the side of the hallway to talk. Be aware of the fact that some people have to get from one side of the school to the other, and they may be anxious to get there. Not everyone has time to leisurely amble through the halls like snails.

There’s also the issue relating to school computers. There are plenty of classrooms that have their own devices for students to use, and while most students have their own devices, there are a few who don’t. It’s alright to use a school device if it’s necessary, but it’s important to remember to plug them in afterward.

I can’t remember how many times I’ve walked into a class to find all of the school devices unplugged. I often have to search for a device that has enough power to last me the hour. While you may be leaving the class and no longer have use of the device, remember that other students might have to use them, and they can’t do that if they’re all out of power. The plugs aren’t difficult to locate; it shouldn’t be an issue. If you want to go the extra mile, plug in any computers you see unplugged, even if you didn’t use it.

The great thing about being more considerate is that you don’t have to go out of your way to do it. All you have to do is think of ways you can make things a little easier for another person in your ordinary routine. Hold the door open if someone is walking right behind you. Push in your chair so people can get around you. Be quiet during lessons or movies; just because you’re not interested doesn’t mean no one else is. Don’t mock people or talk about them behind their back. If someone drops something, pick it up for them.

Small things like this can improve other people’s day, even if only by a tiny bit. Understand that sometimes people are just in a bad mood, and they might not be the friendliest person at that moment. Of course, being in a bad mood doesn’t excuse you from being considerate, either. Everyone has days where they can’t muster up the energy to be positive, but that doesn’t mean you have the right to bring everyone else down with you. You don’t even have to go out of your way to do something, just don’t be a jerk. It’s near impossible to be considerate all the time, so it’s no sweat.