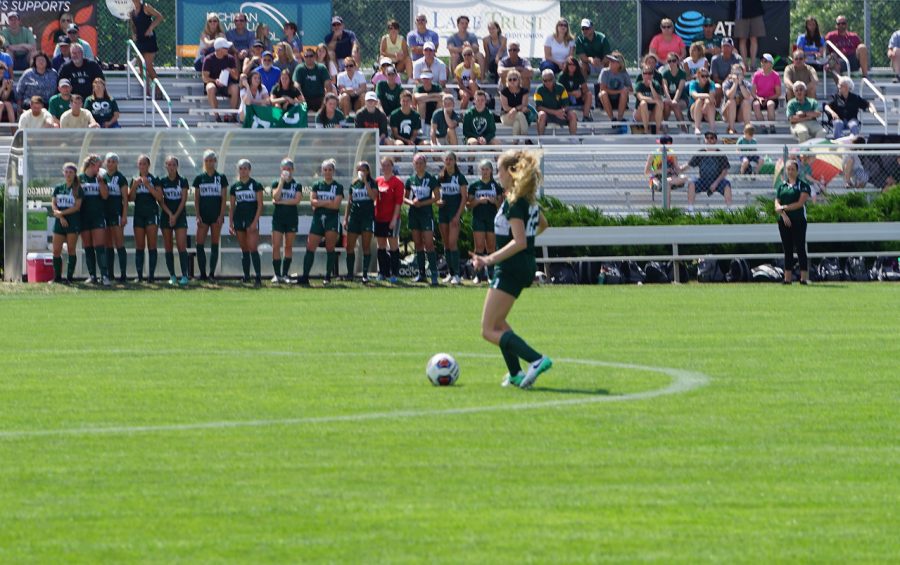 Junior Abby Irving can usually be found on the soccer field, a place she’s been able to call a second home since her early years playing. She has verbally committed to play for Grand Valley State University and plans to continue her career through club soccer until then.

Abby started playing soccer at the age of three and continued to play as she grew up. Her love for the sport has only continued to grow as she has progressed as a player.

“With soccer, obviously, I like the physical activity and how that keeps me in shape, but I also love the competition and bonds I make with the girls on my team,” Abby said. “We have practice four times a week and games every weekend. I’m with them a lot, and it’s fun to build those relationships.”

Abby plays for both Midwest United Director’s Academy (DA) and FHC’s own team but could only join the school’s team last year. She’s younger than most juniors, so she is grouped with a slightly younger age group on her DA team. Abby’s club season runs year round with four practices every week and a game every weekend, traveling as far as Minnesota for games. While Abby still has two more years of club soccer, she looks forward to being able to play at GVSU.

“Last year, I gave GVSU my verbal commitment, so I just keep in touch with the coach right now,” Abby said. “He’ll come and watch our games, [which] are also taped so he can also watch them online.”

Abby says she would like to continue her plans of playing throughout college, but no further. Female professional soccer players are paid far less compared to their male counterparts, and Abby says that under those circumstances, it isn’t a viable option for her.

“There’s really no good future for women in professional soccer because they get paid less than minimum wage,” Abby said. “They don’t get paid enough because people watch more men’s soccer so men get more sponsors. Women who play professionally are really only able to “make it” if they’re sponsored by Nike, Adidas, or something similar.”