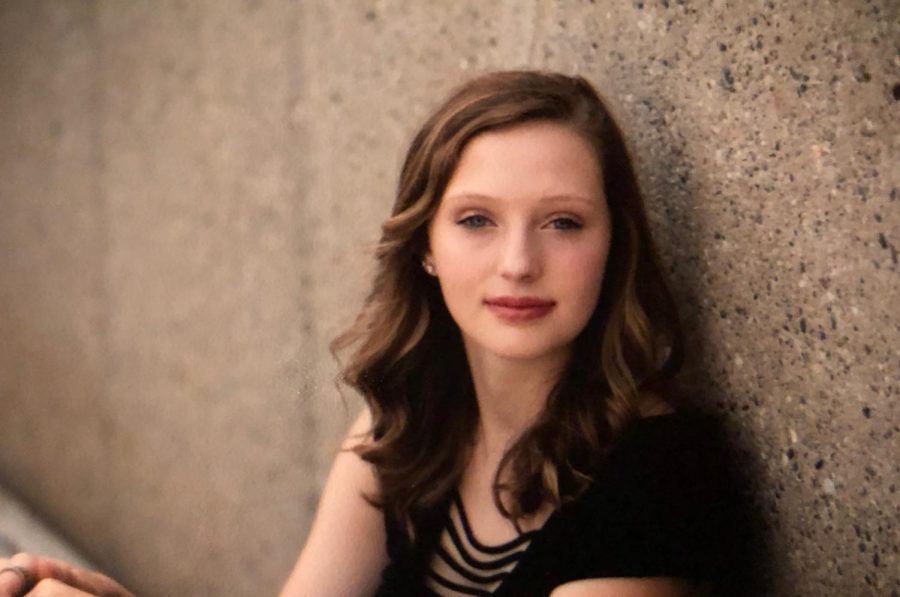 Nothing comes easy in life; that’s the harsh reality of the real world. However, once this fact is accepted, success becomes a much more viable possibility.

Even at such a young age, senior Kirsten Fentzke understands the values of genuine hard work and has been reaping the benefits ever since.

For Kirsten, this virtue was in her life even back in elementary school. As a third grader, she struggled more than the other kids when it came to reading.

“All my classmates could read and connect with literature, and that was something I didn’t have for a long time,” Kirsten said.

Despite the difficulties, Kirsten trudged on, continuing to tirelessly work to improve her reading. And finally, after countless hours, it began to click for young Kirsten.

“I could barely read, and they were putting me through reading help down at the elementary school,” Kirsten said. “After that, I was a really, really proficient. I read two or three grade levels above what normal students would. And then after that, I just read all the time. Every chance I got– reading, reading, reading.”

Now as a senior in high school, Kirsten has enrolled in advanced English courses all through her academic career.

“Last year, I took AP Lang, and it made me want to strive for something more– I wanted to push myself a little bit harder, that much more,” Kirsten said. “So this year, I’m taking AP Lit, and I’m really excited for the coming yeara�� I love the teacher, and I love the curriculum.”

As for athletics, Kirsten struggled at first to find her calling– until she discovered field hockey.

“Honestly in middle school, I was kind of awkward,” Kirsten said. “I was not quite as athletically inclined as most other kids, so I picked up my field hockey stick, and it was the first sport that came easily to me. I tried soccer and volleyball and stuff like that and [I] wasn’t very coordinated, but field hockey was actually quite easy. I knew I wanted to do it for a long time.”

For six years, Kirsten threw herself into field hockey. Over those years, the sport taught Kirsten numerous lessons.

“[Field hockey] has taught me a lot about teamwork,” Kirsten said. “You have to trust the people behind you that are backing you up; you have to trust that your teammates are going to be there for a certain play or certain instance. And losing is hard. You grow closer to people when you lose with them because you’re all disappointed– you’re all kind of upset. But then you got to move forward and build back up, and that brings everyone closer together.”

And this year, her hard work finally culminated in the ultimate reward: a state championship.

“[This year’s season] was incredible,” Kirsten said. “We were first in the division, so we had the Division Championship under our belt. And that’s amazing for our team because usually, all the good teams are on the east side of the state; we are the first team on the west coast to win the Division II Championship. And then we went on to win states, which was an amazing feeling. It was just the most incredible thing ever.”

Such a glorious achievement was especially sweet, considering this was Kirsten’s last high school season.

“It was the best way to end,” Kirsten said.

Theater is another love of Kirsten’s. Ever since fourth grade, she knew that that was a hobby she wanted to pursue.

With that infatuation for theater instilled in her, Kirsten immediately went to work putting her dream into motion as soon as she entered high school.

“Freshman year, I went to Mrs. DeMeester’s room with one of my best friends, and we said, “We want to do anything– just let us do something in the play,a��” Kirsten said. “We ended up handing out playbills at the front of the house. We weren’t backstage; we just sat there and handed out playbills. And then flash forward to senior year, and I am the one backstage getting everything together and helping the underclassmen.”

Now as a senior, Kirsten has worked hard to find her role.

“So I have dabbled in the sound area, and that’s really, really fun,” Kirsten said. “But I really found my niche in Deck Crew, which is moving all pieces on stage and off stage during the play. So if something gets moved, it’s me in black behind the set piece moving it on [and] off.”

With four years and seven productions under her belt, theater is certainly a passion of Kirsten’s.

“I’m definitely passionate about theater,” Kirsten said, “and I love working backstage and creating something with the actors and the other people around.”

But Kirsten didn’t just go from handing out playbills outside the auditorium to being a prominent figure in Deck Crew overnight; sometimes she had to do tasks and jobs that weren’t as enjoyable in order to get where she is today.

“I didn’t just show up, and DeMeester was like, “Oh, you’re going to be head of Deck Crew,a��” Kirsten said. “It is nothing like that. You have to do the work and work hard towards where you want to be. So it’s definitely more me kind of working my way up and doing jobs I maybe necessarily didn’t like. Like sweeping the stage? Kind of boring. Do I love it? Not really. But do I love moving things on and off stage and being a part of that production? Absolutely, and I will do anything to be a part of it even if it’s in a small way.”

Kirsten certainly understands the importance of simple, unadulterated hard work. Her command of this virtue is bound to take her far in the future.

“You definitely have to work your way up; you have to do the work,” Kirsten said. “You do any job that you can. Like DeMeester or somebody directs you to the mop the floor, and that’s what you do. You do the best you can, and then you slowly move up. You do better and better jobs, and you work your way up to where you want to be or where you most enjoy spending your time.”