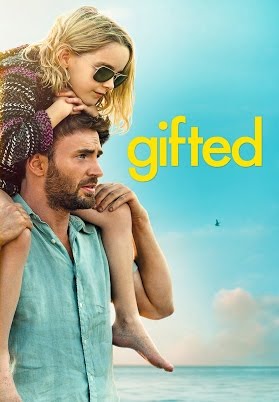 Actor Chris Evans takes on a different role than the superhero most may know him for in Gifted. Evans plays Frank Adler in a sweet, simple story about searching for love, finding balance in life, and pursuing his dreams. Gifted is a film in its purest form.

A seven-year-old child prodigy, Mary (Mckenna Grace), lives with her Uncle Frank in a small blue house on the coast of Florida. After her uncle has taught her everything he knows, her elementary school finds that they are no longer able to challenge her academically. They suggest a private school for the gifted. Mary’s uncle denies the offer because he wants Mary to grow up, play on the playground, and live a normal childhood. Then, unexpectedly, Frank’s mother shows up. She meets sweet Mary, gives her expensive gifts, and offers Mary a “better” life where she can further her education. As Mary’s legal guardian, Frank stands up and is firm in his wish of having Mary grow up as a normal child. The story continues to court where they battle for the custody of Mary.

To say I was touched by this movie would be an understatement. You could have found me in my room weeping after each scene (this is not an exaggeration). I have never cried so hard during a movie in my life. The actors were phenomenal. Every emotion felt so real; it made me feel for them.

The cinematography was also very well done. My favorite scene was a silhouetted scene with the sun glowing while Mary is on Frank’s shoulders; it’s heartwarming. Gifted’s simple scenes make the film feel like real life, and this really connected me to the movie.

I cried three times– I mean really cried; I needed tissues. This film is truly a showcase of strength and love for family. It’s such a special story with acting that made it all the more real.

After watching Gifted two times in less than 48 hours, I most definitely would recommend this movie to anyone. So grab a box of tissues, a cozy blanket, and be prepared to feel all of the emotions: happy ones, sad ones, and even encouraging ones.