The problem with talking in today’s world 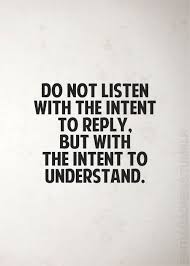 Nowadays, I feel like people are getting very distant in face-to-face interactions with others. Talking isn’t exactly what it used to be. From conversations about what you did this weekend and how much fun you had to conversations that leave you crying, the biggest time I see this issue is when any political topic comes up. I feel like in these situations, people spend more time figuring out how to negate the argument rather than actually trying to listen and hear the other side. The biggest problem is that we listen to find out our next response when we should be listening to understand.

Just recently, I had a conversation with someone I didn’t know well, but we got onto the topic of a recent political issue. Obviously, that is a topic to restrain from, but it happened. When I participate in conversations like this, my goal is- while having my own opinion- to also be willing to hear the other side’s argument. Of course, while I was taught to do this, many people weren’t. The most frustrating part of this debate was when I was attempting to speak my part, he would interrupt me saying the same statement over and over again. It began to feel as if I was speaking to a brick wall. Everything I said, he would refute, which was fair, but he wouldn’t hear out my reasoning. Along with just being rude, I learned that this is just an issue that we wouldn’t agree on.

My problem with this interaction was not that this man and I disagreed on something; instead, it is how the discussion just became more yelling and responding instead of listening at all. I am okay with being disagreed with as long as I see a reason for why you believe what you believe. But when no reason is presented, and you are just yelling to be yelling, that is unfair.

While this is one example, I see events like this every day. Not to as high a scale, but I see evidence from people talking. People are so involved in themselves and what they want to say, they barely focus on the other person’s statement or even sometimes the emotions of the person. Even when people present emotions during a conversation, I see the other person trying to one-up their counterpart.

One person says something made them really sad, and they had a bad day. Instead of talking to them about their day and trying to make it better, they look their friend in the eyes and tell them, “Your day still isn’t as awful as mine.”

Now I’m not going to sit here and tell you that when you have a discussion with somebody, and they give their reasons, you have to agree with them. I’m not saying that at all. The point I want people to see is to just understand what they are saying and listen to them. In some cases, maybe your opinion does change, and you see something differently now.

Disagreement in the world will always be present, and it’s not necessarily a bad thing. When we let it control our actions and how we view people is when it goes too far.

People talking will always be present in our world. It will cause conflict and compromise. But if we all continue to just focus on ourselves and what we want to say, we are restricting ourselves to a whole other world. A whole other world of other experiences and stories and even political topics in which you’re missing the other side that maybe will help you see more. There is so much out there and so many good, interesting people we miss out on because we are so wrapped up in ourselves.

Next time you have a conversation, whether it be with a complete stranger or someone at work or even a close friend or family member, try to listen. Don’t listen so you know what you are going to say next. Listen to hear what they are saying. Listen to understand. Talk to talk and learn about someone or something, not to be right.