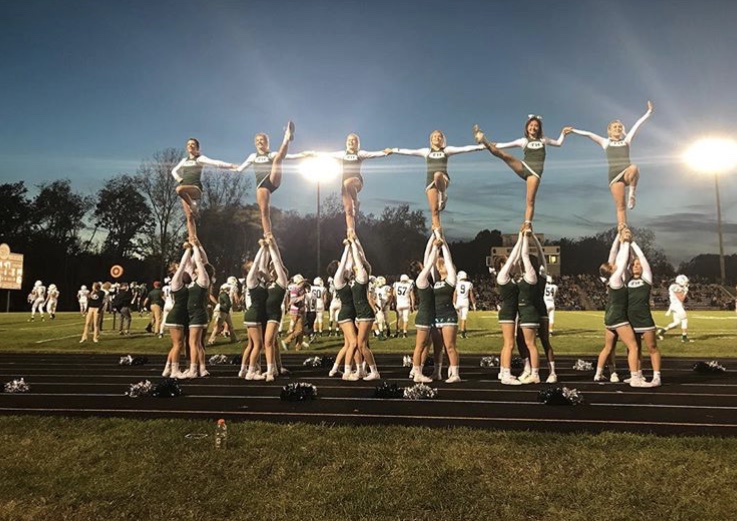 Every day, sophomore Meredith Carpenter makes her way into the gym after school to practice what she loves to do most: cheering. What she and her team have to do is no joke. A new cheer everyday? No problem. A new stunt everyday? No problem. Each team member puts their heart and soul into every cheer, and they love doing it.

For Meredith, cheering isn’t just a hobby; it is a lifestyle. Meredith started cheering in fourth grade and from there her love for the sport only continued to grow.

“I have been cheering for seven years now,” Meredith said. “I always feel really excited going to cheer. You can’t be sad while cheering with your best friends and doing the thing you love most.”

Meredith and all of her teammates work every day trying to perfect their cheers, stunts, and routines. They spend at least two hours a day cheering, but all of their hard work pays off in the end.

“Cheering is a hard sport with constant memorization and drilling everyone until we all are in sync,” Meredith said. “Being able to show all of your hard work and having it pay off is really great.”

Sideline cheer is an intense team to be on. Constantly preparing yourself for more and more cheers every practice is difficult. Apart from that, it is even harder having to perfect cheers and stunts along with it. For junior Dora Pomeroy, those tasks are just the beginning.

As a flyer, Dora has to be able to trust her base teammates and trust herself not to get nervous. But luckily for her, sideline cheer has a saying: never let your flyer hit the ground. This goes without saying, but to have this extra reassurance helps put the flyers at ease.

“I just love how we are all like a family,” Dora said. “I can put my trust everyone on the team.”

Dora has been on the sideline cheer team for the past three years but has been cheering for six. Her passion for cheering can be seen in everything she does, including at football games as she performs in front of the crowd.

“[Football games] are so much fun to cheer at,” Dora said. “I love the energy of the crowd and getting to show what you have learned in front of the entire student section and the parents.”

“I love cheering,” Lydia said. “I mess up sometimes, but everyone does. So I don’t let it bother me anymore and I don’t let myself get nervous anymore.”

One of the upsides of being on the cheer team is how diverse the team is grade-wise, as cheerleaders from all four classes come together as one to form the team.

“It is definitely fun to have some freshmen on the team,” Dora said. “I like being able to teach the freshmen, not only at cheer but in their school life also.”

The upperclassmen are always encouraging, supporting, and constructing the freshmen into amazing cheerleaders and girls.

“[Being on the team] really is like having a bunch of sisters,” Meredith said. “I really like the feeling of being able to have [the freshmen] here and being able to teach them and show them around the high school and in cheer practice.”

Their kind and compassionate vibe is definitely helpful in building team chemistry and to draw more people to try out for the team each year. With such a good reputation around the school, our cheerleaders definitely live up to expectations.

Even with new cheers for each game and a new stunt to wow the crowd each week, it is still extremely rare to see a mistake. Why? It is most certainly because of their unrelenting and intense drilling of cheers each practice to perfect their timing.

“Cheering is a very difficult sport, with constant drilling on techniques, synchronization, and memorization,” Meredith said. “It is definitely difficult but we work extremely hard to get it all perfect.”

In addition to the thirty different cheers that they have learned over the years, the cheer team continues to add new cheers every day. With this rigorous schedule, the team should receive more recognition than it does.

“A lot of people don’t think that being on the cheer team should be continued a sport,” Meredith said. “So being able to show people how difficult it is and what you have to put into is an indescribable feeling.”