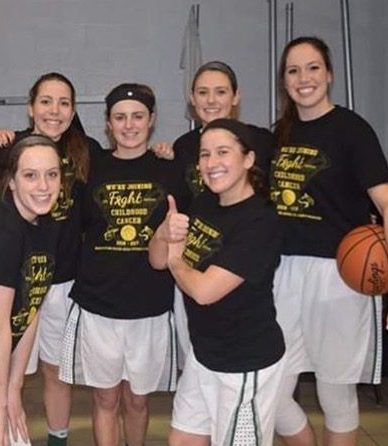 I can still remember in 6th grade when my gym class was split by gender. The boys got to play basketball while the girls had to learn gymnastics. At the time, I wanted nothing more than to play my favorite sport: basketball. When I asked my gym teacher if I could switch and play with the boys, I was told that I was better off learning a sport suited for girls. I was heartbroken as I watched the other boys doing what I loved while I sat outside being forced to partake in something that I was not interested in.

Now, this 6th grader has grown up. I was lucky enough to continue playing the sport that I lovea�� basketball. But, this sport still provides moments of disappointment that are tied to my gender.

As a varsity girls basketball player, I have learned to face the setbacks that come from being a woman in the male-dominated world of sports. Last year after every single home game, my team and I watched the crowd leave after the boys basketball game while we started our warm-ups. It was rather discouraging to see such a large turnout fade as soon as we stepped onto the court. By my first Friday night home game, the message was rather clear that people did not give the same amount of care to the girls.

While I understand that boys basketball has a bit of the faster pace, I don’t exactly understand why people use this excuse to not support girls basketball. We play the exact same sport, we have the exact same rules, we play on the same court, but we just play a bit slower. Why does one minor difference rescind all of the possible support?

If you do not feel the need to support my team and me, I ask that you at least respect us. There have been games where we were short on warm-up time because spectators from the boys game were standing on our court. If you want to leave, sure, go right ahead. But please, have the decency to let us start our game without people standing on the court. It is rather rude to totally disrespect our space and our time.

While the equality of girls and boys sports is an issue I am very passionate about, I’m not belittling the boys basketball team. It is clearly not their fault spectators do not care for my sport. They work just as hard as us. I am very lucky that the boys on that team are some of the girls’ greatest supporters. I hope that people will continue to support the boys, but also support the girls team in tandem.

Aside from girls basketball, there is a lack of support for many other female sports teams. When girls field hockey won a state championship, no one batted an eye. But meanwhile, other male sports are often over-celebrated. While it is important to support male sports, we also need to give the same attention to the girls.

While girls sports already face a number of setbacks in terms of support, there are also larger issues. This year, I have learned that the Girls Basketball State finals will no longer be held in the large D-1 arena, but rather they have been moved to a smaller D-3 arena. While I understand that part of the reason for the switch was due to scheduling conflicts and legal issues, it is simply not fair that the girls once again have to compromise. Part of what makes the state championships so exciting is the upscale location. I can understand that we had to move due to a conflicting schedule. But, there could have been more of an effort to give us an equal location to the boys. There are many locations that could be equal to the Breslin. The Van Andel Arena, Little Caesars Arena, or the Crisler Center could have been more suitable locations. But once again, girls have been forced to take the short end of the stick.

I want the same amount of attention as boys sports. I want equal playing facilities. I want to be treated the same as other sports. And I know these wants are not selfish; I’m only asking for equality.