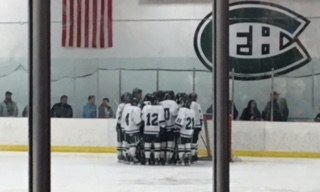 A simple distraction like a broken board in the 3rd period changed the momentum for the FHC Saturday night. The varsity hockey team suffered a tough loss to FHNE 6-2 at Patterson Ice Arena. A bright spot in the loss was the comeback the Rangers mounted in the 2nd period down 3-0. The Rangers played an great period both offensively and defensively.

“We were really strong in front of our own net,” Mielock said. “We just wanted to come out and play hard.”

The first period was a rough start for FHC, as they quickly fell down 3-0 in front of students from the entire Forest Hills School District. The FHC section had become more and more quiet as FHNE kept scoring, and it seemed like the Rangers would be shut out again.

In the second period, however, the Rangers fought through adversity. Two goals came from the Rangers, as they were now threatening to steal a win from FHNE. The first was scored by senior Jacob Demeter. It was encouraging to see the Rangers score after being shut out Friday by EGR. The second was a shot in the lower right corner by sophomore Grant Cardin. That’s when the crowd realized “We got a game.”

Coach Kevin Zaschak said the 2nd period was a period played with lots of energy.

As soon as the Rangers had all the momentum, the worst case scenario presented itself in the 3rd period. A player collided with a board right beside FHNE’s bench. Officials from Patterson Ice Center were called down to fix the board, and it took about 15 minutes to fix. FHNE outscored the Rangers 3-0 in the 3rd period interrupting the Ranger comeback.

Sophomore Tim Kramer said the broken board was a big contributor to the loss, but it wasn’t the deciding factor.

“The board broke and that really threw us off,” Kramer said. “That being said, we can’t blame a loss on that. We really need to be more physical when we’re playing.”

This puts the Rangers at 0-3 and the bottom of the OK White Conference, but there are still plenty of games left to be played. The Rangers will travel to Midland Civic Arena to play against multiple opponents, where they will see very strong competition.

Coach Zaschak said the team needs to clean up their careless mistakes.

“We need to limit our turnovers and careless mistakes,” Zaschak said. “A lot of them were just 2nd and 3rd opportunity shots that we need just to clean up.”