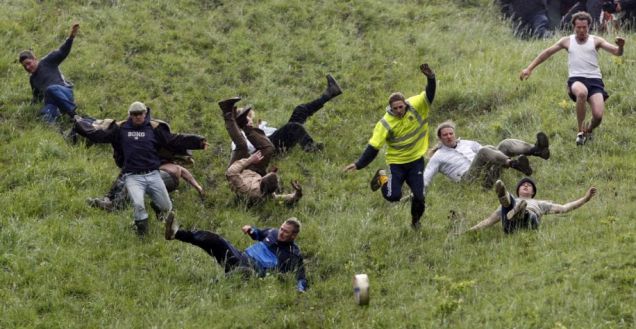 10. Wife Carrying This sport sounds completely ridiculous and it definitely is. Originated in Finland, wife carrying is when men carry their wives on their back through an obstacle course. This pays surprising well though for the grand prize winner who gets five times their weight in cash.

8. Cheese Rolling In this really different sport, a wheel of cheese is rolled down a hill then competitors race after it. The first to reach the bottom of the hill wins the cheese.

7. Extreme Ironing Ironing clothes is a normal household activity, but for these people it’s a sport. They have ironed clothing underwater, hanging from cliffs, while skiing or snowboarding and on top of vehicles.

6. Egg Throwing This sport was invented based on the delight of watching other people fail at catching eggs. It is played at the World Egg Throwing Championship where multiple different egg throwing events are performed.

5. Underwater Hockey Also called Octopush, underwater hockey is exactly like normal hockey, but underwater. The game had its own World Championship which began in 1980.

4. Shin Kicking There is no way there can possibly be a winner in this sport. Whether one is being kicked or doing the kicking, it’s probably incredibly painful, yet officials manage to determine a winner based on whoever stays up the longest.

3. Toe Wrestling Much like thumb wrestling, the object of the sport is to pin down the others toe. The sport was created back in 1976 when England really needed to win a world sports title.

2. Sepak Takraw This sport is basically volleyball with twist, players pass around a ball made of dry palm leaves using anything but their arms.

1. Musical Canine Freestyle Possibly the more adorable and strange sport alive, musical canine freestyle is a sport in which dogs and humans perform together. They perform tricks and dances on the stage together in competitions all over the world.