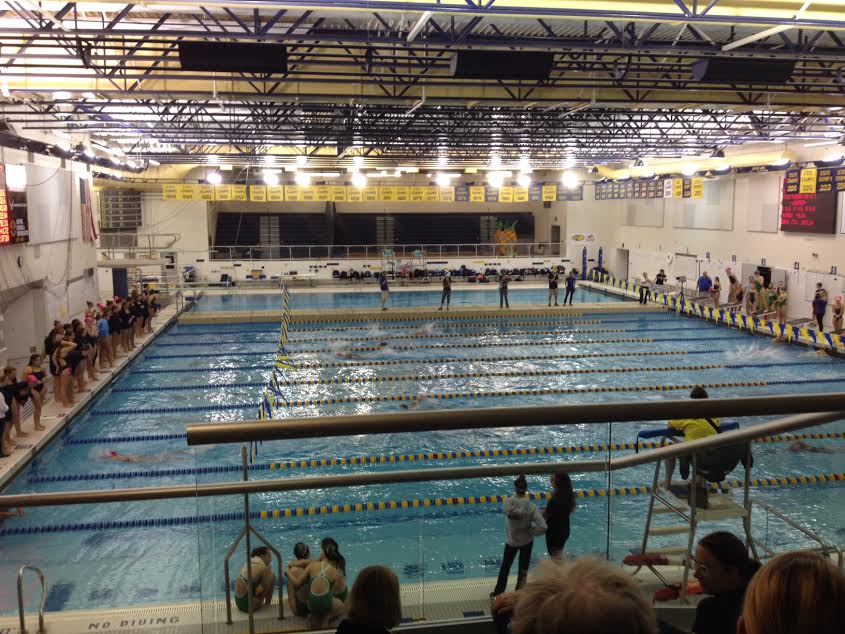 The FHC Rangers compete against the EGR Pioneers for top spots in the 400 meter freestyle relay at the end of Tuesday's meet.

After a tough battle at East Grand Rapids on Tuesday night, the girls swim and dive team fell 20 points short of a victory over the pioneers, who are the number-one ranked Division 2 team in the state of Michigan. After the final score of 83 to 103 was announced over the loudspeaker, the athletes walked off the pool deck without a team victory but with many personal achievements.

“We did really well,” said head coach Tim Jasperse. “We got a lot of season best times and some personal best times, so we’re really happy with that.”

In agreement with assistant coach Clare Emaus and team captain Sara Johnson, Jasperse remained positive about how the team performed at the meet. Both teams were undefeated in the conference coming into the meet, and allthough East Grand Rapids triumphed in the end, Jasperse reflected that he wouldn’t change much about the meet if given the opportunity to do it again.

The lady Rangers scored well in breaststroke and backstroke, including a 1-2 finish by junior Katilind Hooper and senior Lauren Ryan in the 100 meter breaststroke, who traversed the four lengths of the pool in 1:11.09 and 1:11.1 respectively. While diving also proved a strongsuit for FHC, EGR’s strength in the freestyle events was difficult to overcome.

Jasperse agreed that the freestyle events, particularly the sprint distances, were the achilles heel for the Rangers in their fight against the Pioneers.

The team’s strength in other areas, however, still allowed them to make the meet a competitive one.

“We do well in our strokes, and then diving is our ace-in-the-hole, so to speak,” Jasperse said. “The divers are awesome. The divers are the wild card that we have that we can just always do well in.”

Junior diver Erin Neely agrees that diving is one of FHC’s greatest strengths. The divers captured 1st, 2nd, 3rd, and 5th places at the meet.

“I would have liked to perform a bit better, but overall I think everyone was very happy with the turnout and doesn’t have anything major to fix,” Neely said. “I think as a whole we did very well, definitely not our best, but we still pulled out some good dives. EGR had a good meet as well. They executed some very good dives, but nothing that our team couldn’t handle.”

FHC consistently garners top spots in diving, taking, according to Neely, “at least the top three spots” in “every meet.”

“Our team is very solid, and I would say we have number one dive team in the state,” Neely said.

While, in Johnson’s words, walking away without the win was “hard for [the team],” the coaches and athletes believe that this first conference loss will allow the team to progress and hopefully close the gap behind EGR in upcoming competition.

“We wanted this really bad, but it’s not over for us,” Johnson said. “We have a couple more meets left this season and we’re going to learn from this and definitely change some things and hopefully come out on top during Conference.”

Jasperse reiterated this positivity and expressed his satisfaction with the performance of his athletes in spite of the loss.

“I thought the girls came out and competed,” Jasperse said. “We’re going to see East Grand Rapids two more times and hopefully we’ll get closer to them each time as we go along.”