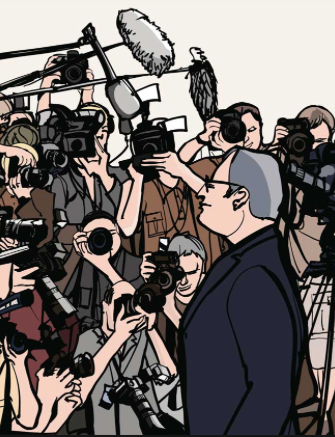 Imagine a world where your knowledge of current events expanded no further than the realm of Forest Hills. You would only be aware of news spread by ear, such as the city council elections or new school board editions. You would have no knowledge of anything outside your city, let alone your state or country. Does that sound like a world you want to live in? I didn’t think so.

This could very well be the state of our world if it wasn’t for journalists. Journalists all around the world inexorably search for the truth, trying their best to provide timely and accurate information. Not to mention, because of the complexity and competitiveness of the industry, most journalists are exceedingly passionate about their trade. A love for writing and lust for a good story are traits that you will undoubtedly find in any good journalist.

Reporters are stationed in Syria, Russia, the Philippines, and other news hubs worldwide, allowing for constant availability of global reporters. This dedication found in thousands of journalists brings them to dangerous areas all around the world, some war-torn or threatening. In fact, the potential harm and peril to journalists abroad is so large that an entire organization entitled the Committee to Protect Journalists was formed. According to them, since 1992, a total of 1262 journalists have died abroad of known motives. In other words, over fifty journalists are tracked down, abducted, or murdered each year in other countries.

Yet even with their commitment to their job, journalists are not appreciated for the full extent of their dedication. In popular television shows, especially those revolving around the police and the law, the “press” is always portrayed as an overbearing burden to those working cases. While the media may be overly inquisitive at times, this is solely due to their passion, and the bad reputation that journalists get on TV shows is no help to journalists in real life.

With the introduction of the internet, news is heavily transitioning from paper to screen, aiding in both instant news for readers as well as less constraint for journalists; many say that the demise of the physical newspaper is just around the corner. While this may be so, the work required of journalists for a good story remains high. With increased pressure to deliver accurate stories within minutes of the occurrence, journalists are having to work harder and harder to deliver good stories for the public.

Without this zealous work from journalists, each and every individual would feel isolated and unconnected from the rest of society. Journalists work hard and fight harder to provide us with news that we feel obligated to know about and allow us to truly be global citizens.

So while we’ve established that the news industry may be changing forms, it’s not dying out; journalists aren’t going anywhere. And even with all these technological advancements, journalists still hold the same amount of dedication and responsibility to the public. It’s time that society recognizes and appreciates the millions of journalists worldwide for their commitment and contribution.