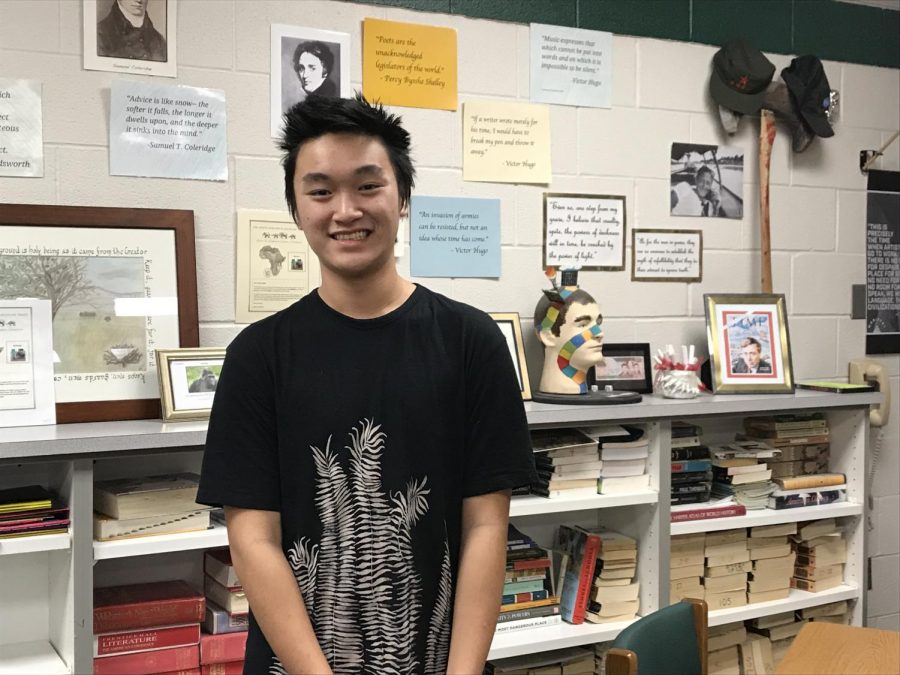 “I’ve taken a lot of the classes [offered in the school],” said junior James Xu in a massive understatement.

Only in his third year of high school, James has already put together quite the impressive transcript. In middle school, upon scoring very well on the ACT, James was placed on an accelerated path. After taking Chem 215 in eighth grade, James proceeded to take AP Chem as a freshman and AP Physics and Bio as a sophomore.

While most would view this as an awe-inspiring feat, James views his extensive scientific studies as a mere perusal of his passions.

“I was just interested [in the subject matter],” James said.

As for math, James doubled up with Geometry and Algebra 2 in eighth grade.

“I wasn’t doing anything over the summer [after eighth grade],” James said, “so I also took Pre-Calculus.”

As a result, James took AP Calculus as a freshman and dual enrolled as a sophomore to study Calculus 3 and Differential Equations.

“I had to drive to Aquinas every Wednesday,” James said. “It was really different from the high school experience. You could see the difference between how college professors work and how high school teachers work; it was really interesting. You had to be much more independent, and you had to count on yourself to get the work done, study, and get your work in on time.”

James appreciates the early exposure to the type of teaching he will eventually encounter once more a few years from now.

“It definitely [prepared me for college],” James said. “It’s the same thing for AP classes. In AP classes, the teachers want you to be more independent and do your stuff on your own. But if you take an actual college-level [course], it’s much [more advanced] than even AP classes in high school even though we say they’re college-level.”

Though rigorous, traditional classes are undoubtedly enjoyable for James, this year he has had the opportunity to delve into a rather unique type of class: AP Seminar.

“I love [AP Seminar],” James said. “Mr. Labenz is always a great teacher. The small size of the class is actually helping because he’s able to extract the weaknesses and strengths of everyone in the class and help them work on it.”

James’ affinity for education is certainly reflected in his choice of extracurriculars: debate team, HOSA, and Science Olympiad. He’s found that his after-school activities have proven to be beneficial aids to his in-school learning.

“[These clubs] just give you a broader view of the world,” James said. “They get you to work on skills you traditionally don’t get to use in class.”

Science Olympiad has been a constant in James’ life for five years. The supplementary science activity has been helpful for James in continuing to stimulate his love for science.

“Science Olympiad exposes you to different varieties of science that are typically not taught in class,” James said. “It just broadens your view and possible careers that you could have.”

In contrast, this has been James’ first year in debate, and though it has been different from his initial expectation, he has thoroughly enjoyed the experience thus far.

“It’s just a different experience from what [one would] expect,” James said. “Because going into debate, everyone was like, “Oh you should sign up because it’s just kids yelling at each other.a�� But it’s not. It’s more formal, more reasoning, instead of just mindless rambling– which I think is the stereotype debate gets.”

Furthermore, debate has helped James improve a variety of skills.

“[Debate helped improve] my speaking in general,” James said. “And you get to see how other kids used their evidence in certain ways. You have to move through obstacles that the other team puts against you.”

Undoubtedly, James is quite the intelligent individual. Conventional learning has always come easily to him.

“I didn’t really have to do that much work to get higher,” James said. “I’ve always had very, very good memory. From a very young age, I could do the ABCs backward and forwards really fast. Usually, if I read something once or hear a song once, I can remember most of the lyrics. So when I do my reading, it’s usually the same thing. I always remember most of it; in the memorization aspect, [I don’t have to put in as much work as others].”

His ease with academics is perhaps a familial trait.

“My older brother is kind of like that, but I think most of it comes from my dad,” James said. “My dad is really smart. He was born in communist China, and everyone was poor; he also lived in a very small village, like a rural village. So he had to work even harder. He went to the best college in China, actually. The Chinese government forced him to go into nuclear physics, but he always wanted to do biology. So he actually had to study biology on his own, and he was the best at biology even though that wasn’t his major. He went to MIT; so yeah, he’s smart.”

However, besides classic academics, James engages in a rather unusual, artsy pastime.

“I was bored at home, and I was obsessed with highlighters,” James said. “I had ten different colors: three different shades of pink, three different shades of purple– it was crazy. I had this plain white shirt, which no one in my family used. So I was just like, “I’m going to draw on this with a highlighter.a�� I finished half of the shirt, and I just wore it one time. Everyone was like, “Oh, that’s a cool shirt.a�� So I was like, “I can do more stuff.a��”

This impromptu decision has led to a three-year-long hobby of James. James especially enjoys crafting his own t-shirts because it allows him to wear clothing he finds interesting.

“[I like to make t-shirts] mostly because whenever my mom and I went to buy clothes, everything in the men’s section is really boring,” James said. “It’s either plain clothes, things with stripes, or things with random words which I don’t know. All these companies suck at designing clothes, so I’m just going to do it myself. It’s self-expression.”

Indeed, this unique hobby has served as a valuable creative outlet.

“[The designs are] mainly just spontaneous thought,” James said. “I have this kite shirt, and I was just like, “I like kites; I’m going to put it on a shirt.a��”

Nonetheless, when it comes to a future career, James plans to stick with his innate gift: academics.

“Last year, AP Biology was probably the class that sparked my interest the most,” James said. “I’m not sure if it runs in the family or something because my older brother William is going into neuroscience and biology research, and my dad does biology research. I guess we just love biology.”