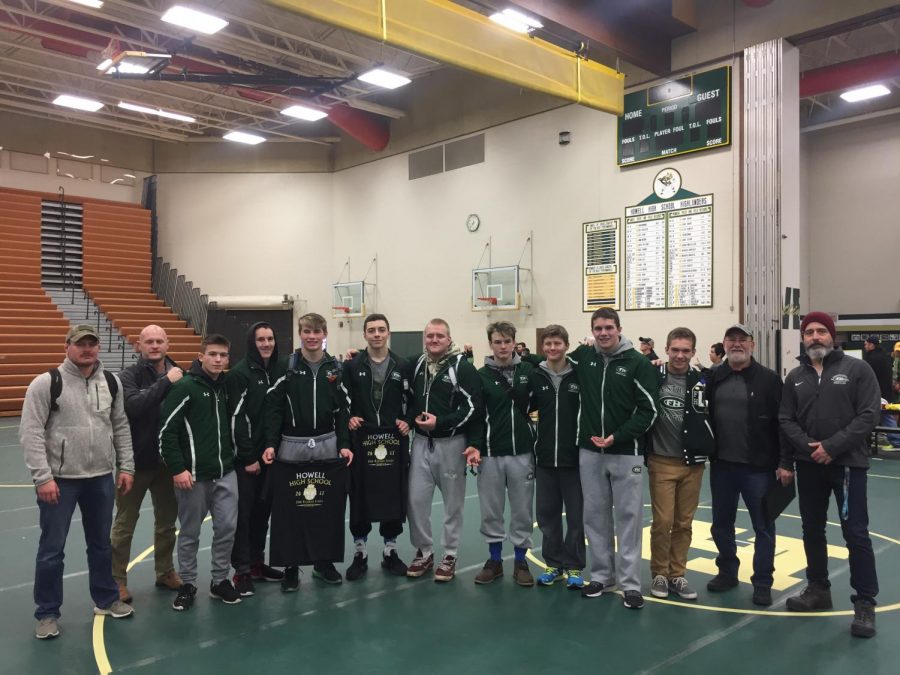 The varsity wrestling team had their first match in Friday night’s win against the Kenowa Hills Knights 49-18. At the weight class of 103, freshman Caden Jacobs got his first win as a varsity competitor.

Senior Isaac Torrey had the same experience Friday night. Isaac immediately shot for his takedown scoring him two points. He allowed his opponent to get up, giving his opponent one point but fought for his second consecutive takedown. Before being pushed out of bounds, Isaac gained two points for an opponent near fall. Starting in the neutral position, he scored another two points for a takedown. While in that takedown, he pinned his opponent in 57.3 seconds during the first round.

Senior Keegan Moore also followed the same method as Caden and Isaac. He started the round with a two point takedown, but let his opponent back up causing him to forfeit a point. Keegan did this two more times, setting the score at 6-3. He went for his final takedown for another two points resulting in a pin. Keegan pinned his opponent in the first round as well, this time in just one minute.

“The first match of the year is always stressful,” said Keegan. “It was a good start and now I can go onto the rest of the season with the harder matches.”

Coach Brad Anderson was pleased with the boys Friday night. They have an even mix of seniors, juniors, sophomores, and freshmen in the lineup. He felt the Kenowa Hills match was for the newer guys on the team to see them in their own competitive atmospheres. He was impressed with the boys performance, but still believes the team has some improving to do if they want to reach their team goals.

This year’s goals are the same as every other year: District champions, qualify for the team State tournament, qualify 6 wrestlers for the individual state tournament, and to be academic all state.

“The academic all state starts in the classroom,” said Brad. “It starts at the dinner table doing their homework. The other aspect, however, is in the wrestling room. Our guys are working incredibly hard, so I believe we can achieve our goals.”

“Howell is a tough tournament,” said Keegan. “It might be a lot harder, but I still planned on placing in first.”

The FHC wrestling team has their next tournament on December 16th at FHC. This tournament is the Kent County tournament.