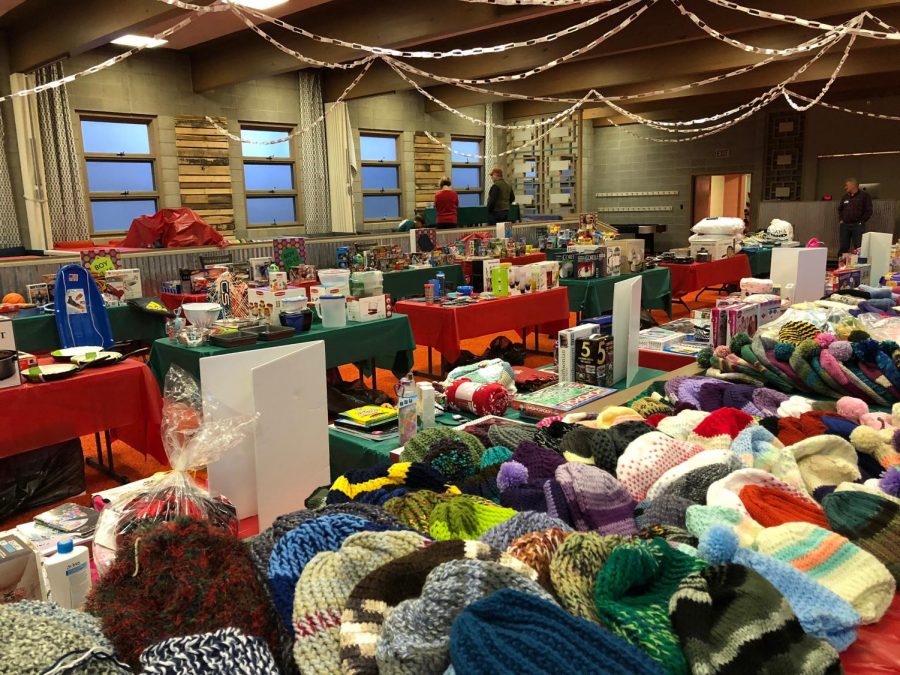 Waking up on Christmas morning, most kids are eager to run downstairs and look under the tree to see the gifts Santa left for them. Unfortunately, there is a good sum of kids who don’t get the opportunity to do so. That’s where Family Promise comes in.

Family Promise, founded twenty years ago, is a non-profit organization that helps homeless families in West Michigan find stable homes and lifestyles to provide for their children.

Since these families have difficult financial situations, their children don’t often have very many gifts under trees on Christmas morning, if any. For the last six years, FHC has teamed up with Family Promise to provide money for gifts and put on a Christmas store that allows families to buy gifts with means they can afford them with.

“We’ve kind of just taken over what [Student Council] has done in the past and added ideas to it [this year],” said Maddie, who has been a part of Student Council since sophomore year. “[We] kind of reworked it.”

During Maddie’s sophomore and junior years, she mainly helped volunteer at the store, buy presents, and get the word out to people. But, as the Board President this year, Maddie has a lot more involvement in the store.

Not only does Maddie ensure that the Student Council representatives are doing their part, but she also keeps in touch with the volunteers from Family Promise. She also plans the store with the help of the advisors, FHC science teachers Patti Richardson and Kristy Butler.

“This year, I’ve spent a lot [of time sending] emails and making sure I was connected with Mrs. Richardson and Ms. Butler,” Maddie said. “[I had to] make sure that all of those people were putting those pieces together, which is a lot of my responsibility this year.”

Alongside Maddie, Richardson has always helped with Family Promise in the past by volunteering at the store. This year, however, is her first year being the advisor for the entire event.

“[Students] are the brains and ideas behind [the store],” Richardson said. “They are the workforce. Without them, there would be no way to run the store.”

Student Council has mainly run the store in the past, but this year, they are getting other students involved in this cause. Maddie is very excited about the dedication that students have to the cause.

“I think that it helps people get really passionate about it,” Maddie said. “We have people who will do gift wrapping; we’ve had other students buy presents with us. It’s not just Student Council, which I really like. I think it’s been helpful, and I know there are more people coming to the store this year to help volunteer and actually talk to the families. I think that has a really big impact on [all] students.”

Maddie, senior Class President Ellie Matelic, and other members of Student Council have worked very hard to reached out to other students to encourage them to get involved.

“I’m really excited to see how many students will be at the Christmas store this year,” said Ellie, who has been on Student Council for five years. “A lot of people from National Honor Society are volunteering, so that will be really great. They can see it kind of come to life.”

Alongside Maddie and Ellie, many students who have never participated in Family Promise have begun to dive into this event.

In order to have the Christmas Store be a success, Student Council had to figure out a way to raise money for the gifts. With a competition-style fundraiser between each grade, a can drive, and constantly spreading the word, they had come up with a lot of ways to raise money.

Each year, their goal has been $10,000; in past years, they’ve only gotten around $6,000. Finally, they reached their goal with all the means of fundraising.

Maddie, Ellie, and the rest of Student Council were nothing but happy to receive this news; they could begin to plan the shopping trip.

Student Council decided to split up their shopping days, just like they did for the store. They went to Meijer and Walmart, along with various students who wanted to be involved outside of Student Council.

“With the ten grand, we’ve been able to buy nicer presents,” Ellie said. “It’s even a little easier for the shopping part because we get to spend about $25 a child instead of $15. We get to get the cute stuff and all the fun stuff, too.”

With the lists the students were given, they went off in teams of two to complete and gather everything on their list, depending upon the number of people in each age group that was given to them by Family Promise.

“We brought all the stuff into the school, and we spread it out by age group on all the tables,” Maddie said. “It’s really cool to see how much stuff we got with the amount of money we raised. We had an entire room full of toys for kids.”

With all the shopping finally complete, the Student Council and Family Promise volunteers were finally ready to put on the two stores: Friday, Dec. 8, and Saturday, Dec. 9 at Cornerstone Church.

At the store, there was no shortage of things to do. Wrapping presents, decorating cookies, babysitting kids, and helping families find gifts are all prime examples of things to be done by student volunteers.

The set-up was vital to what was happening. There were three rooms. One room was for ages three and older, which was where the “Christmas Elves” could volunteer; one room was the nursery room for toddlers and babies, and the last was the store itself.

One of the things many students enjoyed is the “Christmas Elf” part of the store, where the FHC volunteers got to connect and play with children while their parents were shopping.

“The parents come and drop the kids off with you,” Ellie said. “They go do the shopping, and the cool thing is, the kids have no idea what’s going on. You’re just hanging out with the kids, playing games, playing the piano, decorating cookies, doing crafts, that kind of stuff. It’s a lot of fun.”

Another thing students had the opportunity to do was to help run the store itself. Some FHC volunteers were able to help parents through a section of the store where items were free. Others helped as “personal shoppers,” showing the parents what sections to choose from based on age and gender. Lastly, students had the opportunity to eat a meal with the families involved and sit down and actually have a conversation with them.

“Everything went well [this weekend],” Maddie said. “I’m so excited [about] the outcome.”

With the help of Maddie, Ellie, Student Council, and new volunteers, the store went off without a hitch.

“We really exceeded a lot of expectations,” Ellie said. “We hope that next year, [Student Council will] do a lot like this year, maybe even more– get more school involvement, and the more money we raise, the more gifts we’re able to purchase. [The school] is just making sure that we’re able to make a difference in the lives of these people on Christmas.”