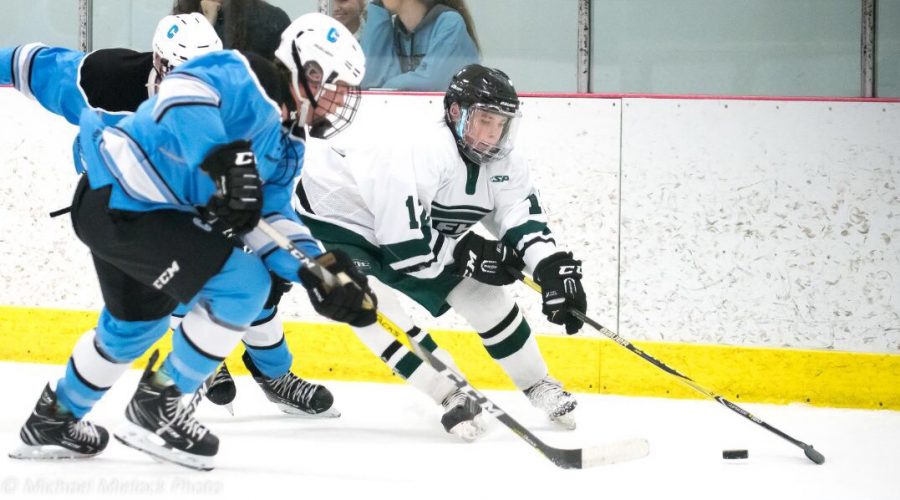 How long have you been playing hockey?

Who has motivated you positively in your athletic career?

“When I was younger it was the love for the game that made me the player that I was up until recent years. The two years before joining Central’s Varsity Hockey team I would not have considered myself a talented player; in result, I did not get much ice time in games. I was in a hole and it took a long time for me to get out of it, but with help from my coaches: Mark Beaufait and Chris Green, I got out of this troubling time in my hockey career. Every day they helped me get better and better, and after a while I finally noticed the difference myself. Without them I would not be the player that I am today, they pushed me everyday and restored my confidence as a hockey player.”

How is your first year on the varsity hockey team going so far?

“Looking at our record is a bad representation of how our team is doing this year. We have been playing top-notch teams that are generally upperclassmen, so for us [being] a young team, it is a bit challenging considering most of us are not used to the high level of competitiveness. I think that as a team we are doing well because of the tremendous growth seen throughout our entire team.”

What was going through your mind when you scored the goal last Friday against St. Francis De Sales?

“I was very relieved, as well as fired up, because I have had this obstacle in front of me for the previous 5 games. In some of the opening games I had a lot of chances to score, but I couldn’t find the back of the net. Now, having scored, I feel like I have gotten over the wall. I am playing a lot better in games and practice now that I have had this confidence booster.”

Do you have a favorite quote you go by?

“My favorite quote is one that is used by the Davenport University hockey program very often. “Iron sharpens iron.” This means the people that surround you are either going to make you better or make you worse. If you sharpen iron with another piece of iron that is not in good shape, the iron you are sharpening won’t fulfil its full potential. In life if you surround yourself with good people you will become better, but if you surround yourself with bad people you will become like them.”