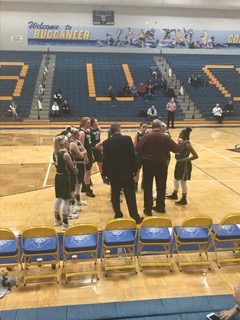 This past Tuesday the girls JV basketball team fell to the Grand Haven Buccaneers 35-21. Going into the game the Rangers knew the Buccaneers would play with extreme defensive pressure in a 2-3 half court trap. Although the team prepared for this at practice, the Rangers struggled to get into position in the first half but attacked aggressively in the second half.

Finishing the first half, the Rangers were down 16-4 to the Buccaneers. Then, beginning in the second half, it all changed. The Rangers came out on the court with a strong full court deny man defense. The Buccaneers were shocked as the Rangers began to make it a tight and competitive game.

Sophomore Alex Vaughn-Earvin and freshman Brittney Probst led the Rangers in the man to man defense in the second half with help from sophomore Kate Willemin and freshman Katie Tellier. The Buccaneers made defense challenging for the Rangers as they had two six foot tall post players working in the paint.

Katie and Brittney also led the Rangers on the scoreboard. The two moved the ball on offense to create scoring opportunities for the Rangers, the majority of them being on fast breaks.

The Rangers next game is Thursday, December 14th at FHC’s home gym. The Rangers will be playing Forest Hills Eastern, a crosstown rival. Going into this game and the upcoming Holiday Tournament at Cornerstone, the Rangers will be learning and preparing for their first conference game after the Holiday Break. They will focus on early and aggressive pressure and coming into the beginning of the game strong.