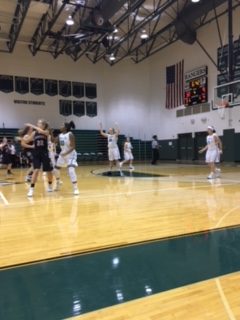 Coming off the court Thursday night, the JV Ranger girls basketball team was ecstatic on their first win of the season. Their opponent was Forest Hills Eastern, a cross district rival. From the beginning, the Rangers were set on winning. They came into the game quick and focused, ready to face their opponent. They kept this momentum throughout the game, as they finished off the Hawks 38-15.

Holding the Hawks to fifteen total points, the Rangers focused primarily on a defensive game. FHC started off with a 2-3 zone and continued this throughout the entire game, eventually adding a full court deny man in the second half. The entire Ranger’s team caused FHE to turn the ball over thus resulting in fast court breaks and buckets for the Rangers. Standing out on the strong Ranger defense though, was freshman Brittney Probst.

At last night’s game Brittney did not start, however, when she did sub into the game it was hard not to see the difference she was making. Immediately after subbing into the game Probst stole the ball from the Hawks and passed to her fellow teammate, Alex Vaughn-Earvin, for a two-point bucket. Besides this important play in the game, Probst also had numerous steals and put herself on the scoreboard with layups and distance shots.

“I think Brittney is just going to improve, because she is an outstanding soccer player and has the ability to run the quick breaks in basketball,” assistant coach Tracy Jenkins said. “She is fast and has the soccer mentality that allows her to make smart passes through the lanes. On defense her quickness allows her to make the other team turn the ball over.”

As the crowd could see, Probst made an impact that helped the Rangers win their first game of the season. Probst, along with the rest of the team, focused on quick transitions and aggressive man to man defense for the entire game. These key factors changed the pace of the game for FHC unlike their previous two games that they happened to lose.

“I think we worked well as a team and we high pressed well and worked together to win the ball back.” said Probst after her first JV win.

“I think in our first two games we let the other team take their game plan to us and we reacted to them,” Jenkins said.”I think we learned from that in this particular game, we took what we wanted to do to FHE and played aggressively.”

With Probst tearing down opponents on defense and making quick transitions, it helped sophomore Alex Vaughn-Earvin stand out on offense. With this being her second year on the team, it is evident that Vaugn-Earvin is skilled and controls the outcome of the game.

In Thursday night’s game, Vaugn-Earvin started and pulled up a big distance shot early in the game to start the Rangers off. From then she had numerous points, rebounds, and fast breaks that led the Rangers to their win. With her as the starting point guard, she shows strong movement with the ball and assists her teammates on the scoreboard.

“Our success is based on how strong our point guard is and she will continue to improve the rest of this season.” said Jenkins about her second year returner.

After coach’s big win, she is just starting to understand what works and does not work for their team. With their next upcoming games in the Cornerstone Tournament, the Rangers are looking to learn some more in depth about their strengths within the team. Hopefully, the Cornerstone Tournament will help the Rangers understand what they will need to focus on as they head into their first conference game vs Northview on January 9th.

“We will turn around and see FHE in the Cornerstone Tournament so I think we are well on our way to playing how we like to play,” Jenkins said. “Over the Holiday break we really need to work on our distance shots. As we work on that at practice I think we will continue to get better as those shots improve.”