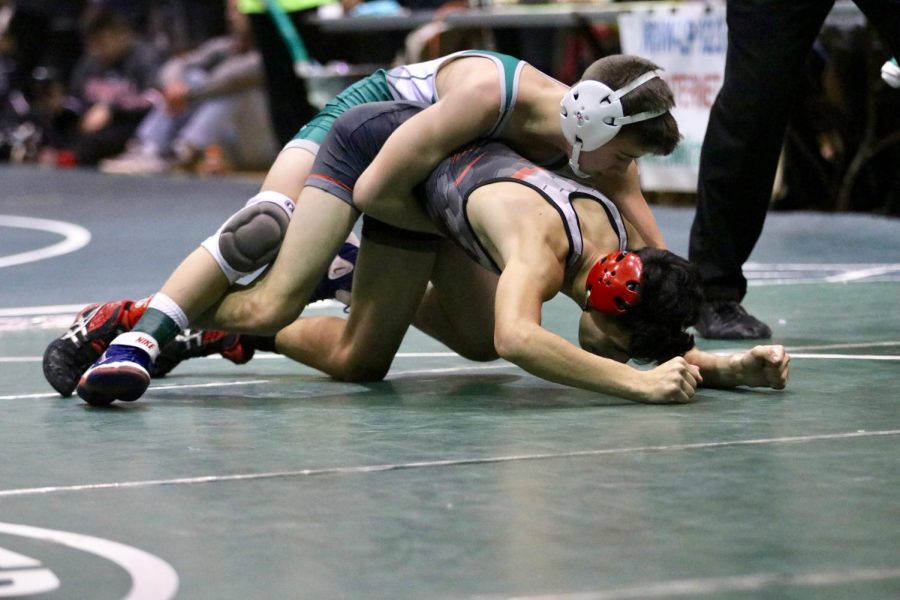 The Kent County Championships were held on Saturday at FHC. Although the tournament is individual, all the wrestlers’ scores add up to place the teams. FHC finished 4th out of 22 teams.

Freshman Caden Jacobs battled hard in his finals match placing him in 3rd. Caden held his opponent off through the first period, keeping the score 0-0 going into the second. Caden started on top, but his opponent earned one point for an escape. That did not stop Caden from getting a two-point takedown, making the score 2-1. In the third period, Caden started on the bottom and got another point for an escape. His opponent then got a two-point takedown tying them at three.

The match then went into overtime.

“I know I had to gut it out for my team,” said Caden. “I could feel the guy wearing down. Even though I was tired I needed to do it for myself and my team.”

Caden is the first freshman to ever place in the top three at The Kent County Championship. He wasn’t aware he had broken a record until one of his coaches mentioned it.

“It is an amazing thing to build off,” said Coach Brad Anderson. “He is the wrestler of the day for our team in my opinion as far as overall performance. He beat some really solid kids today, and I can’t wait to see what he does next.”

Senior Keegan Moore also placed 3rd at The Kent County Championship. In the first period, he launched for a two-point takedown. He then immediately went for a pin and succeeded. Keegan said he got his momentum for his finals match when he lost the match before. He said he bottled up his anger and controlled it into the match.

Senior Donald Alm wrestled for 5th place in his last match. In the first period, his opponent gained two points for a takedown. Doland then started on top in the second period and got two points for a near fall. Donald then had an incredible turnaround in the third period.

His opponent started on top, but Donald got 1 point for his escape. Donald then plunged for a takedown giving him two more points. He was close to pinning his opponent, but his opponent was able to flip over to his stomach. Donald got three more points, this time for a near fall. The match ended leaving the score at 8-2.

“I stared him down and saw he was tired,” said Donald. “That drove me to work harder and get my back points.”

Coach Anderson believes the younger wrestlers had great performances, and the older guys had some opportunities but missed them. He believes it’s a good barometer of what they need to work on in the season.

“We aren’t making glaring mistakes,” said Coach Anderson. “We are making very small mistakes and they are easy fixes. We need to get back into the wrestling room and address those mistakes. The guys wrestled hard today; everyone was aggressive and relentless. There was a great effort out there. I am very happy with the overall effort of the boys today.”

The wrestlers have a match on Thursday against Mona Shores. Coach Anderson said the team will be watching film on Monday and a tough practice on Tuesday to prepare the boys. They will be focusing in on the small minor adjustments that need to be made.