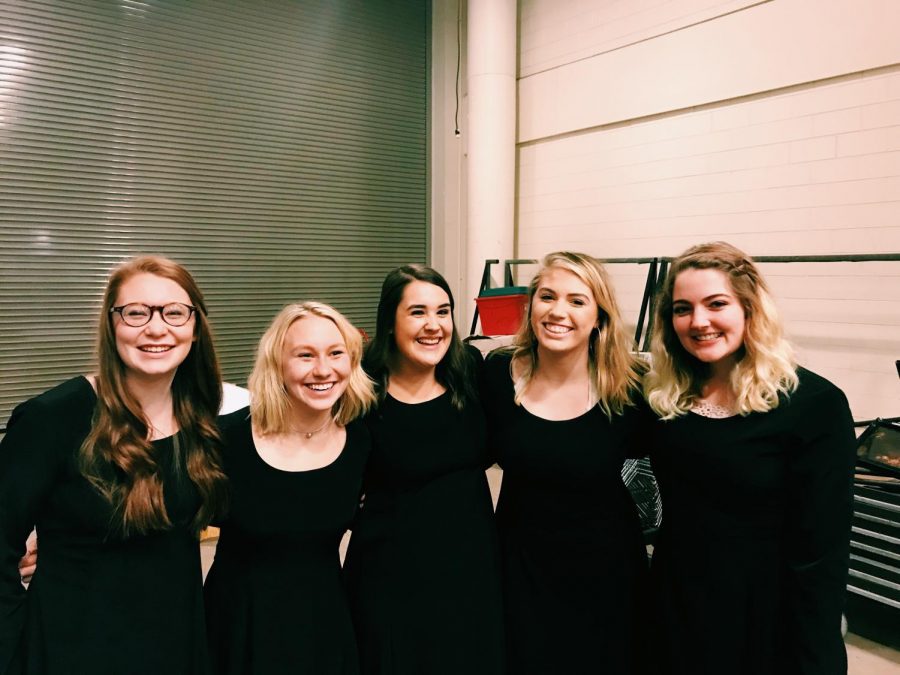 The FHC girls in the Grand Rapids Symphony Youth Choir

One week. Five days of school. Twenty-six and a half hours. Five concerts. Two rehearsals. One day off.

This has been the life of the 115 Grand Rapids Symphony Youth Chorus singers this past week due to their annual Holiday Pops concerts. Sophomore Katie Woods thrives on this schedule.

“Holiday Pops was a long, hard, stressful week,” said Katie, who joined the choir this year. “It’s a miracle we all have maintained our voices and powered through. It was hard, but I wouldn’t have [wanted to be] doing anything else.”

However, the intensity of this past week is not typical for the choir. They ordinarily practice every Monday from five to seven in the Calvin College Recital Hall. The SATB choir works hard on a variety of choral-type songs and occasionally an African song or two. Even with their determination to get a song down, which takes about an hour and a half spread out along weeks of practice, the atmosphere is still light and fun.

“Every rehearsal is just something new,” Katie said. “We’re always kind of laughing about something. It’s fun– it doesn’t feel like work”

All their work goes towards the twelve to sixteen concerts they perform in a year. Usually, the concerts are on a Friday or a Sunday.

While the days of their concerts have some consistency, the locations vary. Generally, the Youth Choir performs all over Grand Rapids. The Devos Performance Hall, where Holiday Pops took place, and the Basilica of St. Adalbert are a couple favorites among the singers.

“The acoustics are incredible [at the Basilica of St. Adalbert],” Katie said. “The vaulted ceilings created an incredible reverberation with our sound that you can’t find anywhere else in Grand Rapids, and that is a singer’s heaven.”

To Katie, the choir is so exceptional because of the people who take part in it.

“It has given me a good community,” Katie said. “I found a new community of people that I connect with in a different way than I can with the people here at school because we all share the same passion.”

“I think [the Youth Choir] made me more confident,” Abby said.”I was quiet everywhere, and you couldn’t get me to say anything. It’s made me better at communicating which was something that was kind of hard for me, especially with people my own age. So being in a group of like-minded people– that just really changed everything for me. I would not be the same person without it.”

Abby originally joined the Youth Choir in seventh grade and has been singing in it ever since. Freshmen year, she auditioned and joined Mandala. She thinks that the reason that the choir works so well together is because of their retreat.

The entire Youth Choir goes to Camp Manitoulin in September to bond and to get to know each other. The weekend is full of campfires, camp activities, and lots of singing.

“The thing is that [the retreat] seems like it is so separate, like just hanging out with the people who are in Youth Chorus would be really different from singing, but it makes everything work,” Abby said.

But it’s not just the other singers in the choir who make it special, it is the director too. FHC choir teacher Sean Ivory is the founder and director of the choir.

“[The Youth Choir] is one of my favorite things,” said Ivory, who has been directing the choir since 2007. “It gives me the opportunity to work with young singers who desire to be there and to work hard.”

Because of the singers’ drive, devotion, and skill, Ivory holds them to high standards and has big dreams for them.

“My goal for each student is individual musical and vocal growth, as well as an appreciation for making live music at a high level,” Ivory said. “I also want them to experience working with professional musicians who push them to improve. Ultimately, I want them to pursue singing in a choir after they leave the [Grand Rapids Symphony Youth Choir].”

In order to accomplish this, Ivory has given his singers opportunities to work with the Grand Rapids Symphony and their Adult Choir. Additionally, every couple of years, he provides the choir with the chance to travel to another country and perform there. In 2013, the Youth Choir took a trip to Prague in the Czech Republic. The purpose was to sing a poem written by children in a concentration camp about their horrid experience.

This year, the Youth Choir has plans to go to Illinois and Iowa to Ivory’s hometown to sing with his old high school choir. They also plan to go to Iceland to sing during the summer of 2019.

Ivory always works to do what is best for his singers and the choir. It is for that reason that he writes his own compositions for the choir. Since the sopranos and altos greatly outnumber the baritones, Ivory writes pieces a few times a year that tailor to their vocal composition.

“Mr. Ivory is just so talented,” Abby said. “I think that he has that connection with music, and he translates that with working with kids really well. He just always makes you feel like he’s paying attention to what you need and what’s happening.”