Past Champions of FHC: Jessica Ostertag 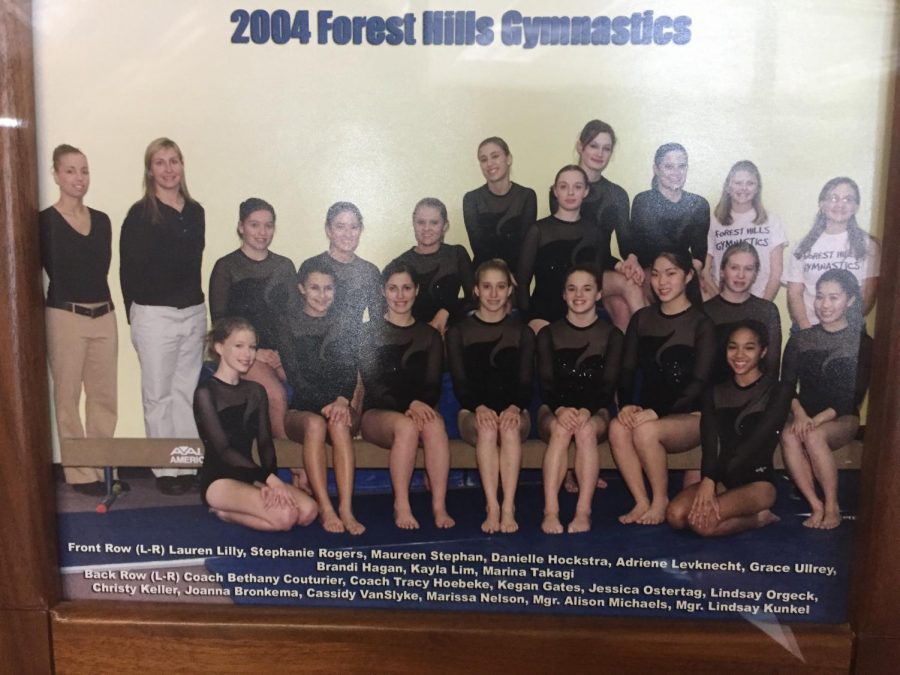 Jessica Ostertag was part of the Forest Hills Gymnastics (FHG) team back in 2004. The team was coached by Central math teacher Tracy Will. At the time, there were not enough gymnastics teams in the conference, so there was a combined conference, also known at the Rainbow Conference. She was a junior when they won the conference.

Talk about your time being a part of FHC gymnastics. What was your best moment? What is your favourite memory?

“My personal best moment was when I qualified for the individual state championship. I had made it to the qualifying meet two years in a row, and completely messed up my routine both times. Moments like this are difficult in gymnastics, because you spend a whole year trying to perfect a routine that lasts no longer than 2 minutes. If you’re not “on” for those two minutes, none of it matters. On the third try, I finally performed the routine in the way I had hoped. Competing in the individual state meet was extra special because of my long journey to get there! Every time we waited for results after a meet, our team would lay in a circle with our heads in the middle. Our coach Tracy Hoebeke-Will, in typical math teacher fashion, always knew our team score and exactly what we needed to win. Usually, Tracy also knew how well the other teams were doing, too. My favorite memory was waiting for the final team results after the conference meet. There was such a sense of relief and anticipation. We were pretty sure that we had just won the championship, but we didn’t want to believe it quite yet. We were so giddy as we waited to hear the rankings; we kept looking at each other, laughing, then shushing each other. When they finally announced the rankings, we completely erupted. It was such a proud moment for our team!”

What’s it like knowing that your team’s conference championship will forever be remembered here at FHC?

What did it take for the team to become the conference champion?

“Our team was dedicated and hard-working. We understood what it meant to compete individually for the benefit of your team. There is a lot of pressure when you are performing a routine by yourself. Even though you are out there alone, your routine directly impacts your team. It’s easy to point fingers, but we never did. We worked well under pressure because we supported each other as individuals.”

What was the biggest motivation/inspiration for you in order to be the champs?

“Unlike many sports in Forest Hills, our gymnastics team was small and usually flew under the radar. We were motivated to put FHG on the map and to show our community what we could do! We had also come close to the championship in the past, so we were thirsty for the title. Being so close to winning pushed us even harder in 2004.”

What are some life skills/lessons you learned while playing on the team? Has anything transitioned over into your work life?

“I learned many life lessons from gymnastics. I learned how to handle both winning and defeat, and to not give up in the face of defeat. I also learned how to work as a team, and how important it is for each individual on a team to contribute. As a teacher, teamwork is so important to both model and teach to your students.”

How was the team chemistry back when you played? Are you still friends with any of them now?

“FHG was like a family. I had competed in club gymnastics since 2nd grade with many of the girls on the FHG team, so we literally grew up together. We were a small, tight-knit group, so we really supported each other and motivated each other to be our best.”

Do you still participate in gymnastics today?

“When I first started teaching elementary school, I taught an after school gymnastics class for children in grades K – 2nd. I really enjoyed it because it allowed me to teach beginner level gymnastics skills. Other than this class, my gymnastics career ended with high school, mostly due to a bad injury during my senior year. Gymnastics really takes a toll on your body, so it’s a hard sport to keep up into your adult life. Sixteen years of intense practice and competition was enough for me, but I will always love watching the sport!”

“My life is very different than it was during my days at FHC. I actually live and work in Quito, Ecuador. I am a Learning Support Specialist at an American International School called Academia Cotopaxi. Here, I am working on the school’s Inclusive Education Program. I love that my career combines two of my passions — teaching and traveling. Living in Ecuador is pretty amazing. I am surrounded by new cultures and languages, it’s 65 degrees year round, and you can hike a volcano on the weekend!”