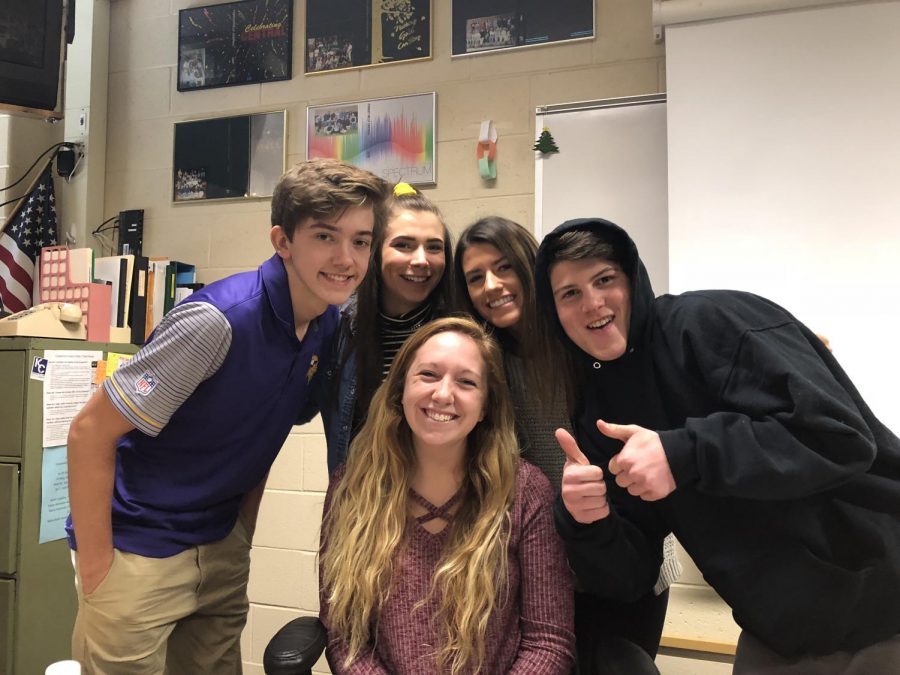 “I’m super excited to get my full-time opportunity in my own classroom,” Wierenga said.

When former English teacher Rick Lanning entered retirement, a vacancy was left in the English department. With administration and other English staff members trying to find a solution to cover the opening, they found the solution right in front of them: Wierenga.

She was given all of Lanning’s regular English 10 classes, along with the classes she student-taught. Now, Wierenga is finding her rhythm as a full teacher.

However, before taking over Lanning’s position, Wierenga found her beginning as a student teacher right here at FHC.

“That first day, I was really nervous,” Wierenga said. “There’s a lot of pressure on the student teacher semester because up until that point, it’s just observing or [being] in a classroom for four hours a week. But, student teaching is truly immersing yourself.”

Throughout her college career, Wierenga knew she wanted to be a teacher. During her student teaching, she was shown that teaching was more than just notes and memorizing. It was learning about her students, who they were, and caring about things in their lives. Teaching high school allowed for that perfect chance.

Before given the spot on the English 10 staff, Wierenga was also able to be a full-time substitute.

“I was ready to be a full-time sub,” Wierenga said. “I already planned on being here for a while but it’s even better to have this new opportunity.”

An opportunity like this for a student teacher is rare. Many of them do their semester at one school then have to go somewhere else and apply for the job. With this not being the case for Wierenga, she is enjoying all the opportunities she has been presented with.

“It’s so unique that I have the chance to stay with my classes from my student teaching,” Wierenga said. “None of my classmates have that opportunity. They had to say goodbye and I still get to be here.”

Along with being a new face on the English staff, Wierenga has found a new spot as the girls’ freshmen basketball coach.

“I knew I wanted to coach,” Wierenga said. “An opportunity came up to coach out at Jenison but I wasn’t sure I wanted to make the commute. Eventually, I got an email saying the position opened up and it was perfect.”

Going into the full-time role, Wierenga had two classes she was already familiar with. However, she was also given two new English classes to meet (who originally had Lanning).

“It was definitely very different,” Wierenga said. “With [second and third hour], I already had a connection. With [first and fourth hour], it was meeting all new kids in the middle of the year.”

With the sudden change in teachers, it is recognized that students will feel a bit offset. For Wierenga, she is attempting to bring in her teaching style while still attempting to recognize how Lanning used to teach.

“Between him and I it is a pretty strong difference,” Wierenga said. “I have nothing but respect for him, but we are so different. He was at the end of his teaching career and had seen everything and I’m in my first year. I know nothing compared to him. So, there is a lot to learn.”

Even though she is coming fresh out of the student teacher position, Wierenga feels calm and ready for this new beginning. Most of this, she feels, is thanks to her mentor, English teacher Ken George.

“I could not have asked for a better mentor,” Wierenga said. “I think at our core we are very similar with our passion for teaching and students. There are so many things you can learn from a textbook, but you know nothing until you’re in a classroom doing it. Everything about his teaching style is exactly what I want to have as well.”

Wierenga’s high opinion of George is very similar to George’s opinion of her. As soon as the opening became apparent in the English staff, George knew she was perfect for the job.

“From the first moment she was in charge of the classroom, she demonstrated she really had the “ita�� factor as a teacher,” George said. “Whatever it is that makes a teacher truly great.”

The decision was easy for George. He immediately knew Wierenga deserved the spot on the staff and he set out to make sure she could get the chance she deserved.

“I right away told her this would be a great opportunity for her,” George said. “I talked to administrators and anyone that would have any say in the decision that she would be a great choice for that position.”

The goal for the English staff was to create the easiest transition and change for all students. So, utilizing Wierenga’s current teaching practices was a clear, working idea.

“She already was fully teaching my second and third-hour classes,” George said. “So the transition to flip and send them to her and for me to take the honors; it was the least disruptive plan.”

This transition also made future plans for the school easier as this allowed for George to take on teaching honors full-time. This change wasn’t due to occur until next year but this change sped up the process.

“She was already teaching pretty exclusively in my regular classes,” George said. “It just, again, made sense for a quick easy flip.”

The students were the biggest concern in this staff switching decision. Giving students the easiest change in the middle of the year was crucial. For sophomore Dana Kistler, other than a change in rooms, she feels the adjustment has been pretty smooth.

“It’s been actually really cool and interesting to have a new teacher,” Dana said. “It’s like a fresh new start.”

Switching to a new teacher mid-year is a change for any student. Even the change in environment can feel weird.

“At first when we switched rooms, I didn’t remember we were switching so I came [to George’s room] and everyone was like, “we switched rooms,a�� and I had to walk down there,” Dana said. “It’s taken some adjusting because of repetition and routine, but now it’s refreshing.”

For Dana, she has a positive outlook on this new switch of staff. Having Wierenga previously makes it easy and she believes she will have a very positive impact on the school.

“I think Wierenga will be a great full-time teacher,” Dana said. “I think having a new teacher in the building is a great opportunity for not only the students but the school [as a whole.]”

The environment was a very small change for Dana, but for someone like sophomore Sami Walquist, the change isn’t a change in environment but a teacher as a whole.

“It was weird at first when Mr. Lanning left,” Sami said. “But when we received the news that Ms. Wierenga was our new teacher, it was a pretty exciting opportunity.”

The transition for some students was a little concerning, but for Sami, she believes the transition is very smooth going.

“I think it has gone very well,” Sami said. “Ms. Wierenga has made our class a little more chatty, but for first hour that is really fun. She makes sure we stay organized but still have fun.”

As a previous student of Lanning, Sami sees the differences and has very high hopes for the rest of the current school year.

“I believe it is going to go great,” Sami said. “I am already used to Ms. Wierenga’s teaching style. It feels like she has been teaching for two months but it’s only been two weeks.”

With Wierenga’s teaching career just beginning, she has already placed her roots here at FHC going from student teacher to basketball coach, yearbook adviser, and full-time teacher all in a matter of weeks.

“I love the chances I have been given,” Wierenga said. “I don’t know who to thank but I honestly feel so lucky.”