Boys swim and dive with a 106-72 victory over Northview 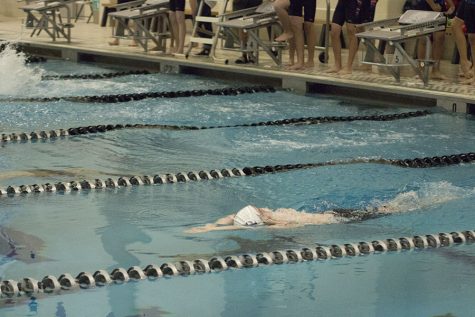 The boys swim and dive team dominated on Tuesday in their meet against Northview, securing a 106-72 win. Coming off of the Forest Hills Invitationals with very little practice between the meets, the Rangers had ten swimmers place higher than fourth place, varying from seniors all the way to freshmen.

Freshman Josh Stevenson placed in the top four for his first time on Tuesday in the 200-yard Freestyle, with freshman Avery LeTourneau also adding another fourth place in the 50-yard Freestyle. Freshman Sam Musgraves has had a very good start to the season in diving and ended up placing third last night.

Always successful senior Matt Wilson placed first in the 50-yard Freestyle and led a 1-2-3 FHC sweep with sophomore CJ Hier and junior Charlie Krug close behind. CJ also placed first in the 100-yard Freestyle, with senior Paul Jeong right behind him placing second. Junior Ryan Talbot has proved himself as a talented diver this season and continued his success last night, placing second in the diving portion of the meet.

Boys swim and dive is now 3-0 in the conference meets. The Rangers’ next meet is Saturday, Jan. 13 at Battle Creek Lakeview.