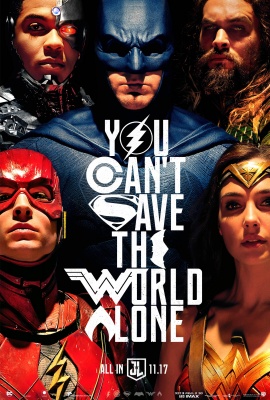 Recent DC Films have been rated pretty poorly by critics. They began with the not-so-grand opening of Batman V. Superman: Dawn of Justice. This opened the DC cinematic storyline and got it off to a pretty weak start. The next installment was Wonder Woman. Wonder Woman gave them a much better push, doing incredibly well at the box office and receiving positive reviews overall. Now, for their third installment, they brought together the Justice League. From critics, this movie obtained mixed reviews, but in my opinion, this film deserves more praise than it has received.

The acting in this movie was very impressive. Nothing Academy Award-winning but definitely solid overall. Every actor really took to their character, giving the movie a pure feeling. The dynamics between the characters all hold true to the original comics. Batman, portrayed by Ben Affleck, is the Batman everyone loves. Affleck does a fantastic job as both Batman and his everyday persona: Bruce Wayne. Gal Gadot also took on her role of Wonder Woman again in this film, filling it just as well as she did in her stand-alone film. A few fresh faces were in this film, including Jason Momoa playing Aquaman, Ezra Miller as The Flash, and Ray Fisher as Cyborg. Even the new actors play their roles strongly, increasing the intensity and feeling of the film.

The overall plot of the film is very easy to follow but still in-depth enough to keep it interesting. Even someone who hasn’t seen the previous DC films would be able to understand what is going on. It begins with Batman and Wonder Woman talking about trying to assemble a team to help protect the world after the death of Superman. As the two leaders try to assemble their new team, the main antagonist of the film is developing his weapon for the destruction of the world. The plot build-up is done very nicely, making sure that developing the team is a big part while still showing you the evil on the horizon.

The character development in the movie was probably one of its strongest parts. The characters throughout the movie find their place in themselves and find their dynamic without the other characters. Wonder Woman confesses to Batman her fear of being a leader because she will be accountable for the death that could follow, and the dynamic between the two on the topic of leadership is done very well throughout the film. The three newbies, being Cyborg, Flash, and Aquaman, all find their place within the team and with each other. The comedic humor in the film comes a lot from the bond built between Cyborg and Flash. By the end of the film, I could feel that the team had really come together.

The direction of this film was well done, especially given the events of what occurred during the filming. The original director, Zack Snyder, started the film but had to drop out in the middle due to a death in his family. A new direction was given to Joss Whedon, who already had plenty of experience and was well-known in Hollywood. Given the fact that there was a difficult transition in directors right in the middle of filming, it surprisingly almost seems unnoticeable. It would be interesting to see the original Snyder cut, but this movie still turned out well.

Overall, Justice League was an amazing film I would recommend to anyone. For superhero lovers, they’ll love seeing all these characters come together on the big screen. For someone just looking for a new movie to watch, I would still recommend it. It’s all easy to follow but definitely will keep you interested from start to finish. I’d say this movie definitely did the original comics and characters “justice” in their first big screen showing.