Competitive cheer has another outstanding performance 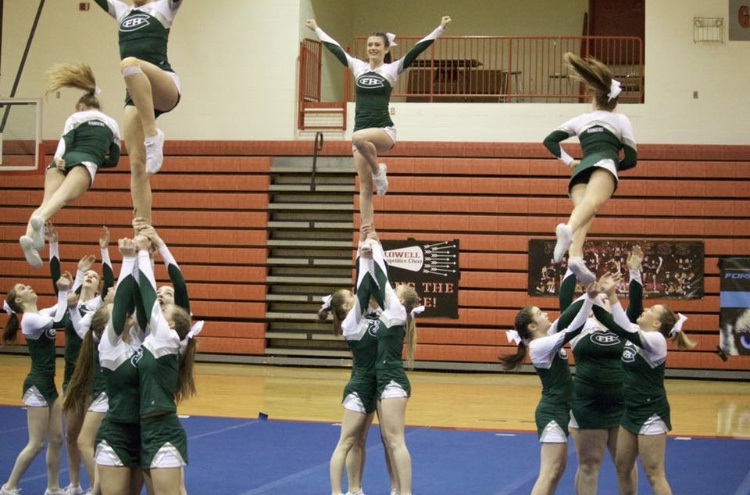 The varsity competitive cheer team is making improvements each week. The Cedar Springs Red Hawks, Forest Hills Northern Huskies, Lowell Red Arrows, Northview Wildcats, and Ottawa Hills Tigers all attended the competition Wednesday night in addition to FHC. This was the team’s first OK White Conference meet. The team placed third out of the six teams that attended. The girls were able to improve their scores once again in each round.

Round one is the least practiced round because the girls should be able to go home and practice this round on their own. In this competition, the motions were hit, but voices and jumps still need improvement.

Round two is the most nerve-racking due to it being the round that will either pull the team further ahead or cause it to fall behind. The team is only really judged on the precision drill in the beginning, the timing of the skills, and overall impression. The girls felt good about round two and increased their score even more in this round.

Overall the Rangers scored 50 points higher then they did at their last competition, scoring overall 702.66 points.

“I’m so proud of the girls tonight,” said head coach Oliva Betts. “Although they did not place where they wanted to, our scores increased incredibly from what they were at our last competition. Since this is a brand new team it isn’t about the place, it’s about making improvements every week. Our score increased majorly in each round, and I couldn’t be more thrilled about it. The girls are heading in the right direction. Special shoutout to junior Maija Dickens, sophomore Josie Wagenaar, freshman Delaney Niswonger for giving their all out on the mat today.”

The team has its next competition Saturday the 13th and at Wyoming High School.