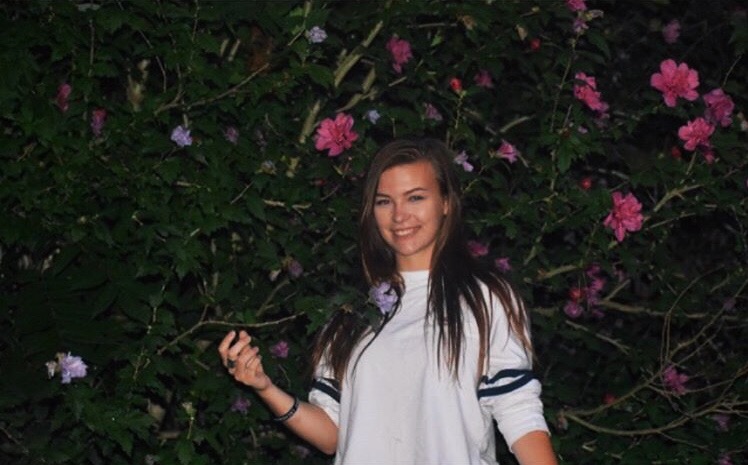 Processed with VSCO with l10 preset

Sam is legally deaf. She was born being able to hear but mysteriously lost her hearing after dozens of ear infections over a few years. Because she could never fully hear such small sounds before, she has now become hyper-aware of them after she received hearing aids. Now, her hearing aids allow her to experience the world in a whole new way, similar to that of a person who needs glasses to see.

“When I did get my hearing aids, a lot of things made noise that I didn’t know made noise, and it’s a strange experience,” Sam said. “Things like plastic bags and light switches, and little things you wouldn’t notice.”

Although Sam does have the option of hearing aids, she does not always prefer to wear them.

“I have hearing aids so I can go to school,” Sam said. “I only use them for school because I need to hear, but I like being deaf. It’s very peaceful, and hearing is very overwhelming if you have lived both.”

Sam got the diagnosis of being legally deaf at the beginning of 2017. Despite this information, she went on living her life and doing the thing she loves most: basketball. There are setbacks she encounters, but with the help of her teammates, she is able to overcome them. For Sam, teamwork means a whole lot more than high fives. It means helping each other figure things out, literally.

“With the gym, it’s hard to hear because everything echoes,” Sam said. “We sometimes have practice that’s later so I’ll keep my hearing aids in. They only last 12 hours, so sometimes they’ll die at the end of practice. But, there’s a girl on my team who also knows sign language so [she is able to interpret] for me.”

Although Sam needs help from her teammates for basketball, band is something she can do all on her own. Sam had been playing the trumpet for a year before she had her hearing aids and continues to even after. Just like how Sam says she loves the ability to turn her hearing aids off, she finds this same pleasure in band. Sometimes the music will sound funny in Sam’s microphone, so she simply switches her hearing aids to only being able to pick up treble clef, something that has come in handy for her.

Even though Sam is passionate about both basketball and the trumpet, her real passion lies in something completely different – something that presents entirely new obstacles: after high school, Sam is planning on joining the Army. This dream could potentially be obstacle-filled, but Sam is only worried about one thing.

“My only concern [with joining the Army] is not passing a hearing test – which would let me into infantry – which is the part of the Army I would like to be in,” Sam said. “If that happens, I could function without them, or go into another part of the Army.”

Her inspiration came from watching her stay-at-home dad have the same passion for going into the Army. Sadly, he could not join because of multiple knee surgeries, but Sam hopes she can overcome her presented challenges, and be able to call wherever the Army may send her “her homea��.

Sam is aware of the potential setbacks and has come up with a plan if she were to not pass the hearing test: she wants to become a sign language interpreter and take that on as a career instead.

Sam likes to think that the only thing she had a hard time adjusting to was remembering to charge her hearing aids and to bring a charger whenever she was staying overnight somewhere. Even though she may not see herself facing daily challenges, she did have to adjust. Sam lives a full life, despite what some might call a “setbacka��, she sees it as an opportunity

Sam has become fluent in sign language and even taught her brother the beginnings of the language, and he went on to learn it on his own. In the end, Sam has her family and friends to fall back on, but still works hard for everything she has accomplished.

“Dreams and dedications are a powerful combination,” Sam said.