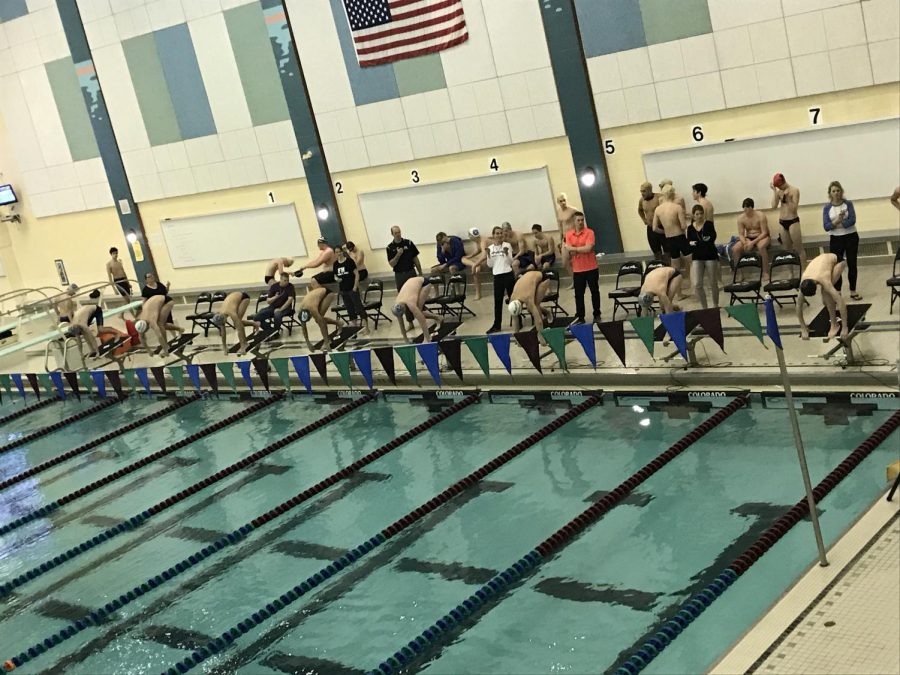 Boys Swim and Dive had a very successful dual meet against Grand Rapids Catholic Central on Tuesday, Jan. 16. Despite the Cougars’ best efforts, the Rangers were able to win 107-78.

“I lean on the captains a lot and seniors as well,” Neat said. “They’re the veterans of the team and a situation like tonight was an opportunity for the other kids to step up and do something that they don’t always get to do. They got to help all of our young kids.”

Freshman Avery Letourneau went head first into the challenges that he was faced with. He placed fourth in the 100 Fly along with a first-place finish in the 200 Freestyle Relay. With this being his first year with the team, he has been doing exceptionally well.

“I don’t think while I swim, I just do it,” Avery said. ” The only thing I don’t want to be is last and get the pity clap. I’m trying to break records and the way to do that is to not think and just go.”

Avery has been an enormous asset to the team and is trying to qualify for states. While doing this, he may have a few bumps in the journey. His captains, however, will be there to pick him up and help him through his journey.

Senior Matt Wilson will be one of those people who help him. Matt swam an unusual event on Tuesday, he swam the 100 Fly. Even though this may not have been his specialty, he was still able to come in third place right behind junior Charlie Krug.

“[The 100 fly] went pretty well and I think I was right around my best time with it from about two weeks ago,” Matt said. “I was a little tired from training, but I think it was a good opportunity to get some variety at a meet like this.”

Boys Swim and Dive will be taking a break for two weeks. This puts them 5-0 in their conference duals. Their next opponent doesn’t face them until Tuesday, Jan. 30 and they will be competing against Grand Rapids Christian at home.

“I lean on [senior leadership] heavily, so they can help make us a better team,” Neat said. “Their experience helps because I can’t do it all, so I lean on them to help with their experience to showcase you need to work on this, or how about this, or even a high five when they realize that was a really good performance and a great finish. It’s valuable on what they can do in this program because the dynamics of this program is three schools. So we really build on the family of Forest Hills in this program.”