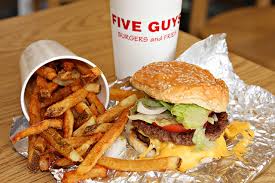 Sometimes, the simplest things have the greatest effect, and that was the exact thought that ran through my head as I entered Five Guys Burgers and Fries. That and my mind racing about the delicious smells that radiated from the kitchen.

Located in front of Centerpointe Mall, this Five Guys location was opened a few months ago, and upon entering the restaurant, you can tell that it is basically brand new. Five Guys’ image is one that is very cool and original, with bags of potatoes strewn about the restaurant and a general theme of red and white checkered walls, this chain certainly deviates from the norm.

I was greeted by a very friendly worker at the front register, and I ordered a cheeseburger “all the way” (tomatoes, cheese, onions, mushrooms, pickles, ketchup, and mustard). I also ordered a “little” fry, knowing from past experience that a little fry at Five Guys means a heaping pile of salty goodness. I ordered a large drink and headed to the Coke Freestyle machine, which is another cool feature of the restaurant.

My order was yelled out by a worker, and I was presented with my brown lunch bag of deliciousness. The packaging of the food mimics the restaurant’s simplicity theme by making it seem like you are in your own kitchen. As I opened the bag, I was immediately impressed by the sheer size of the burger. This wasn’t your ordinary burger, it was heaped high with multiple patties, lettuce, tomatoes, and two fresh buns. The burger itself was incredibly juicy, flavorful, and filling. I devoured it in about two minutes, and felt like I needed a nap immediately after. The fries were more of the same. They gave me a small cup, but it seemed like they added about a half pound of extra fries.

Overall, Five Guys is undoubtedly one of my favorite restaurants because of their expert combination of simple and delicious, quirky and wholesome, and speed and quality.