One of us is Lying provided the perfect murder mystery 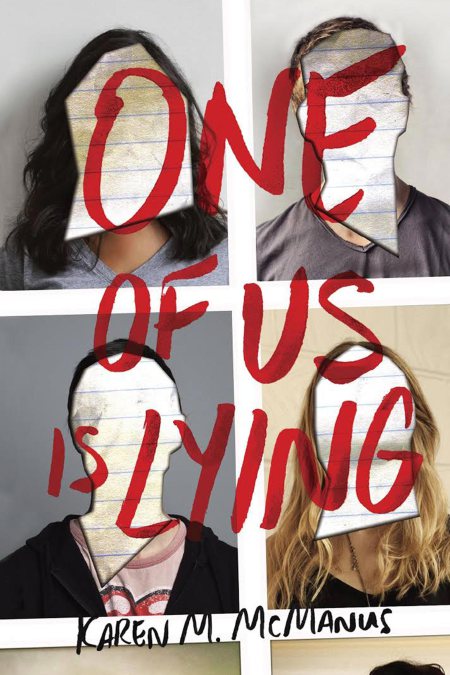 The first thing I noticed when I picked up the book One of Us Is Lying was its interesting cover. It looked mysterious with its four faceless pictures and its title written in cryptic red ink. Once I read the inside flap, like I always do when picking up my next read, I was even more intrigued. It was a murder mystery– my favorite kind of story.

One of Us Is Lying follows the story of five high schoolers who walk into detention, but only four of them will make it out alive. Karen M. McManus tells what could be an average, stereotypical story in a way that kept me turning each page in anticipation of what would come next. Each chapter is in the perspective of one of the prospective students, which gives the readers insight on each of their personalities and thoughts. Bronwyn, the brain, seems like someone who would never murder a classmate. Baseball-star Cooper has a secret, but it’s not the one you would think. Homecoming Queen Addy was always my number one suspect because of her dismissive, ignorant attitude. Stereotypical bad boy and actual criminal, Nate, seems like he could have murdered Simon, the school’s gossip.

Nobody knows why Simon died. Each student was put into detention by fate, and they had never interacted before. By an extreme coincidence, the one time they are all together, Simon dies right in front of them. None of them knew why he died, but to the police’s eyes, they had everything to do with it. They grow closer as the investigation heats up and the suspect becomes farther away from sight. I always thought I knew who murdered Simon, but with each chapter, I became more unsure. It was truly a mystery until the very end. Each plot twist left me in shock; at the end of each chapter, I had to take a deep breath to let new information sink in.

I will admit that there is a bombardment of information in the beginning of the book that is hard to keep track of; it’s like learning a new equation in math and trying to fit all of the pieces together. I had trouble piecing together the overwhelming number of facts about each character and just remembering who was who in the beginning, but as I got deeper into the story it became clearer. It was a rocky start, and sometimes the only thing that kept me reading was the mystery of who killed Simon and whether he was really that much of a target.

As I mentioned, Simon was the school’s gossip; he had a website where he posted the dirt on all of his classmates– similar to Gossip Girl. After he died, snippets of gossip about each of the students in detention were revealed that hadn’t yet before been on Tumblr. Of course, everyone freaked out, and it disclosed more facts that led me to think each student had something serious to hide about the day Simon died. They teamed up against the investigators and became allies. Even though they all “trusted” one another, they deep down all think each person is lying or hiding something vital to the investigation.

One of Us Is Lying is the perfect title for the murder mystery. With each twist and turn, I was sent on a rollercoaster of confusion: who actually killed Simon? The reveal was genius, and McManus provided a great ending that didn’t seem too rushed. At the end, each piece of information fit together perfectly, and I was very satisfied with the way the book ended. The character development was superb, and I truly got to know each character and their inner thoughts. When I finished the book it was like they were still a part of me. One of Us Is Lying was a riveting story that left me intrigued from start to finish, and I highly recommend it to anyone who loves a good mystery– or just wants to find out who killed Simon.