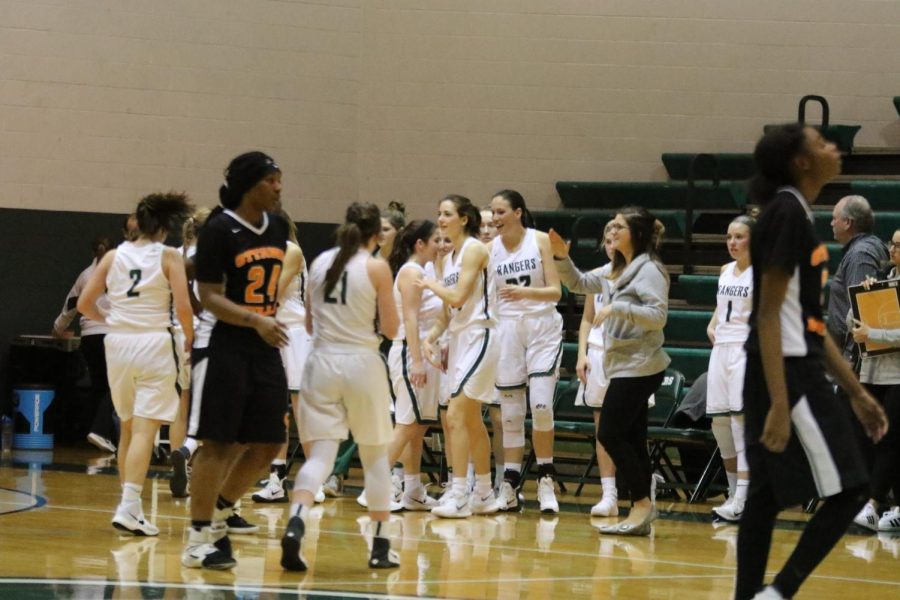 Junior Claire Baguley and senior Madi Winter’s chemistry on the floor has been unbelievable. The duo’s teamwork and passing abilities helped lead the Lady Rangers to their 59-47 victory over Ottawa Hills last night.

“It’s cool to have two floor generals out there to direct people and be a coach on the floor,” said Madi who had 15 points and 5 assists on the night.

FHC was able to clear the bench with five minutes remaining in the fourth quarter, as they sat with a 45-23 lead at the end of three.

“It felt good to go out and play hard for as many minutes as I could,” said junior Danielle Balanda who chipped in her 4 points and a rebound late in the fourth quarter.

FHC was outscored 24-12 in the fourth quarter, but the starting five were able to have enough of a lead to secure a big conference win.

“We talked about how when they go in, they have to match the starters in intensity,” Head coach Kristina Prins said. “I understand they’re coming in and some of them hadn’t played at all, but that type of scoring just can’t happen.”

In the first half, the Rangers weren’t capitalizing on opportunities. They had 15 missed shots, many of them being layups, and went 30% from the freethrow line against the frequently fouling Bengals. FHC went into the locker room at half only leading 26-19.

“Sometimes we go into a game expecting a certain outcome and then we play that way,” Prins said. “In the first half, we were very overconfident in our abilities.”

An adjustment was made at half time that led to a break out third quarter for FHC. Senior Breanna Probst made that adjustment easy with four steals and outstanding overall defense. She was then moved down low on Ottawa Hills’ leading scorer and rebounder. As Breanna kept this threat from rebounding the ball, it allowed Madi and Claire to pick up the rebounds and find each other up-court on fast breaks. The duo had 12 of the 25 FHC rebounds.

“The adjustment we made feels good because previously we’ve started off strong and we’ve lost our lead or really faded in the second half,” said Claire, who had 22 points on the night. “I think having a game where we play well and get through some adversity in the first half will help us moving forward.”

On the defensive end, along with Breanna, Madi and Claire were key to stopping the Bengal offense in the second half. They had 13 of the 19 steals for FHC Tuesday night. This relentless pressure on Ottawa’s best shooters and ball handlers is what helped turn the tide in favor of the Rangers for the victory.

The Rangers are now 3-2 in conference play and with a big win last night, have momentum going into Friday night’s rivalry game against Forest Hills Northern. FHN brings in a 7-6 overall record, while they sit at 2-3 in the OK white. This game will be intense and emotional with the history between these two teams, but Prins believes it will be the key factor in driving her team.

“For once, I’m not going to be worried about the team being ready to play,” Prins said. “It’s FHN; it’s about winning for pride.”