Payton Waclawski soars through her senior year as a crew captain 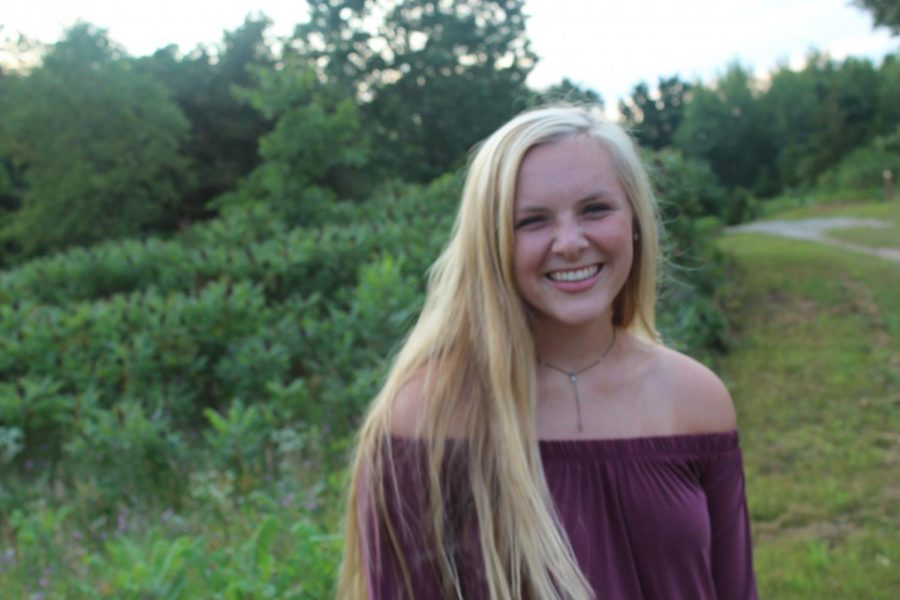 Seated in the back of her boat with seven people following her timing, senior Payton Waclawski soaks in the strong, supportive, stirring atmosphere that she is surrounded by. Within a second of each of her counts, the synchronized clicks of the oars of her teammates prove that her team is a winning one.

This intense ambiance has been the setting of some of Payton’s greatest high school achievements. Since making the decision to join crew, her journey has been filled with both challenging struggles and substantial accomplishment. Between the friends made, lessons learned, and skills gained, Payton’s dedication to crew has paid off in more ways than one could imagine.

“I was first introduced to crew in eighth grade,” Payton said. “My friend [senior] Molly Neary asked if I’d be interested in doing the crew summer camp with her. I immediately fell in love with it and knew I wanted to do it as my high school sport. I participated in fall season and all of winter conditioning. When the season actually started in March, I couldn’t have been more ready.”

Since her freshman year, Payton’s dedication to the sport has only grown. With the end of each season, she anticipates the next even more, and the anticipation pushes her to get through the year. At the heart of her passion is the team atmosphere that each boat holds.

“You can’t row without the other eight people in your boat,” Payton said. “My favorite part about crew is for sure the team aspect, and it’s truly something special when you win a race and get to celebrate with your whole boat/team/family. I also love being stroke seat, which is the person who controls all the timing.”

Of course, the team atmosphere wouldn’t exist without the people that make up the team. With an eclectic blend of rowers from different ages, grades, and backgrounds, the unique personality of each member has created a distinctive, close group of rowers. In Payton’s case, at the core of her enthusiasm lies the strong friendships that she has made.

“Tons of my friends are on the team with me, and most of my best friends do crew,” Payton said. “It’s amazing having people that understand what you talk about 75% of the time. I love all of my friends and the bonds I’ve formed with so many of them. I’m always able to add more friends to the never-ending list each year when crew starts back up and new people join.”

“[As] one of the captains, the atmosphere is pretty chill,” Payton said. “No one really talks about captains being captains until they’re needed. Captains organize a lot of the team gatherings and spread the word about crew events, lead some discussions at practice, and make sure everything is running smoothly between teammates. It is pretty cool to have some people look up to you though.”

As she enters her last crew season this spring, Payton hopes to both maintain the standard that the crew season has reached in the past, as well as improve and attain even greater performance. Along with her three co-captains, Payton and her team are striving to reach better places this season.

“I look forward to crew every single year,” Payton said. “It’s my favorite part of school so having it as a spring sport helps me push through the fall and winter by being excited to row. It’s also a huge stress reliever. Whenever something is bugging me, I can always go to practice and sweat it out or go on a long row and focus on form and timing. It distracts me from my problems.”

Come September, Payton will be enrolling at The University of Detroit Mercy to pursue their five-year Physician’s Assistant program. Though she is excited about her future, crew will no longer be a part of her life; as a smaller school, The University of Detroit Mercy does not have a crew team. But with her accelerated program allowing her to enter the medical field, Payton will be kept busy with her heavy course load.

Though she may not be continuing crew in her future, as she prepares to move on from FHC and start the next chapter of her life, Payton will be able to take all the life lessons she has learned from the intense sport with her. Most importantly, with her strong, lasting friendships and her family, she will be supported no matter what passion she picks up next.

“I am very passionate about my family and friend relationships,” Payton said. “People are a big part of my life, and I couldn’t imagine my life without the connections I have. My mom is honestly my best friend, and I can talk to her about anything. I try extremely hard to keep my relationships with people healthy and happy. I could say happiness is my favorite thing on this planet.”