Through her various activities, Delaney Niswonger has found support and happiness 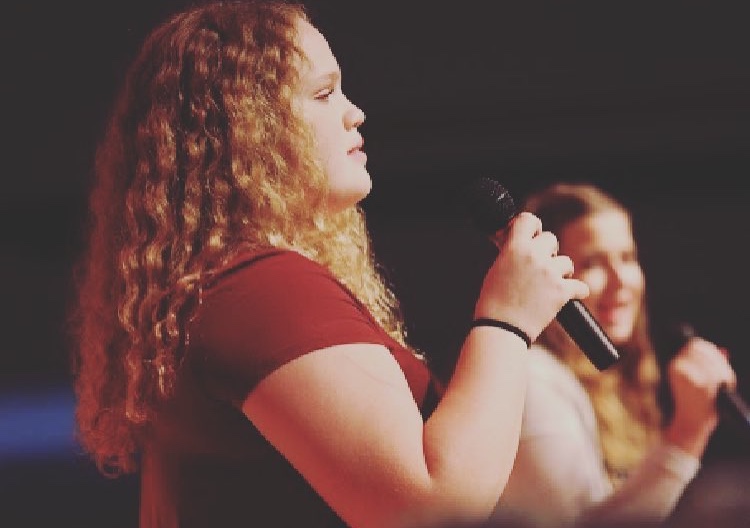 When life gets freshman Delaney Niswonger down, she has not one but a variety of communities that take the role of her shoulder to cry on. Her older sisters and her youth group leaders act as her main support group, and Delaney would not be the person she is today without them.

“All of my youth leaders, they sort of formed who I am,” Delaney said. “If I’m having a bad week or struggling in general, I can always go to them, and they can talk me into what mindset I need going into the next week.”

A lot of the time, Delaney stresses out, and her youth group leaders bring her back to the present and ease a little bit of her pain. Delaney feels that her leaders have definitely shaped her as a person; she enjoys having them in her life.

Along with her leaders, the group itself has proven to be a substantial aspect of Delaney’s life.

“[Youth Group] is a really big part of my life,” Delaney said. “If something isn’t going well at school or there are fights with my friends, I always have that to go to [and] those friends.”

Delaney finds that while youth group is an important part of her life, her family is just as prevalent– more specifically, her sisters, Zoe and Lauren. With roughly a five-year age gap between each sibling, Delaney has discovered that she can talk to each sister about different interests.

“I’m really close with both of [my sisters],” Delaney said. “The age difference is really big, but we all have our different ways of connecting.”

Delaney is grateful for the endless support she receives from her siblings, even if an argument occurs every now and then. Delaney has found that exams produce a lot of trepidation, and her sisters remind her that they are there to offer their assistance in not only those exams, but all aspects of her life.

“They help talk me down if I’m freaking out,” Delaney said. “They are really there for me all the time. During exam time, [my sister] knows I stress about exams. So she’ll [tell me], “If you’re getting frustrated, call me, and I’ll help you.’a��a��

Delaney was born into a highly supportive family; her sisters have proven that. But, Delaney was also born into a musical family. Throughout her life, Delaney has been engulfed in song lyrics, vocals, and music. Her mother was a wedding singer, and most of her family could be found singing frequently.

“When I was little- my mom used to be a wedding singer- I was kind of always exposed to music and singing,” Delaney said. “My whole family likes to sing, except for my dad– sorry, he’s not that great of a singer.”

Being engulfed in music from an early age led Delaney to join her church’s choir, and eventually, middle and high school choir. Since entering high school, Delaney has found that the teaching styles and music difficulty have drastically changed. In middle school, she thought that rehearsal was very structured and not nearly as vigorous as high school, but regardless, she still really enjoys it.

“Choir gives me an excuse to be able to sing for an hour because I really like singing,” Delaney said. “It’s just fun, and I can take my mind off of my other stressful things. It really helps me because there are fewer things weighing on me [when I’m singing].”

As for future plans, Delaney is not planning on pursuing a musical career; however, she has tried out for plays and musicals to gain experience for the future. Musical theater is a great passion of Delaney’s, and right now her main focus is simply to practice. By putting in extra time outside of school, she hopes to see herself in a school production one day.

“I did try out for the play, but that was more for experience,” Delaney said. “I knew the experienced upperclassman would get the roles. During the summer, I try to do classes and camps at Civic Theatre outside of school [for extra practice].”

Another extracurricular Delaney has immersed herself in is cheer. Because of her love for dance, Delaney’s mom thought cheer would be a fun activity for her to try out. Since then, her passion has skyrocketed, and she has been exposed to a variety of friendships she would have not otherwise made.

Cheer is broken up into two seasons: competitive and sideline. The season starts with sideline cheer, where Delaney spends her nights in front of the student section cheering on the football team while assisting her flyers in their stunts. Through doing sideline, Delaney was introduced to competitive, where she tumbles across the mat, competing against a variety of schools.

“[Sideline and competitive cheer are] very different,” Delaney said. “[In] competitive, you have to get your stuff done because you might have a competition the next day. Sideline isn’t as serious I guess; it’s more of our warm-up season to get into competitive.”

Delaney enjoys the sport as well as the friendships she has formed. Her teammates are like a family to her; they assist her on and off the mat or field. A few of her teammates are also in choir, so she gets support from them in cheer, choir, and life.

Through all of Delaney’s activities, one thing has always stayed the same: the endless amount of love and friendship she has gained. She does things because she loves them; she does them because they make her happy.

“Mostly, choir makes me happier,” Delaney said. “I feel like that’s a big reason why I do it– it makes me so happy.”