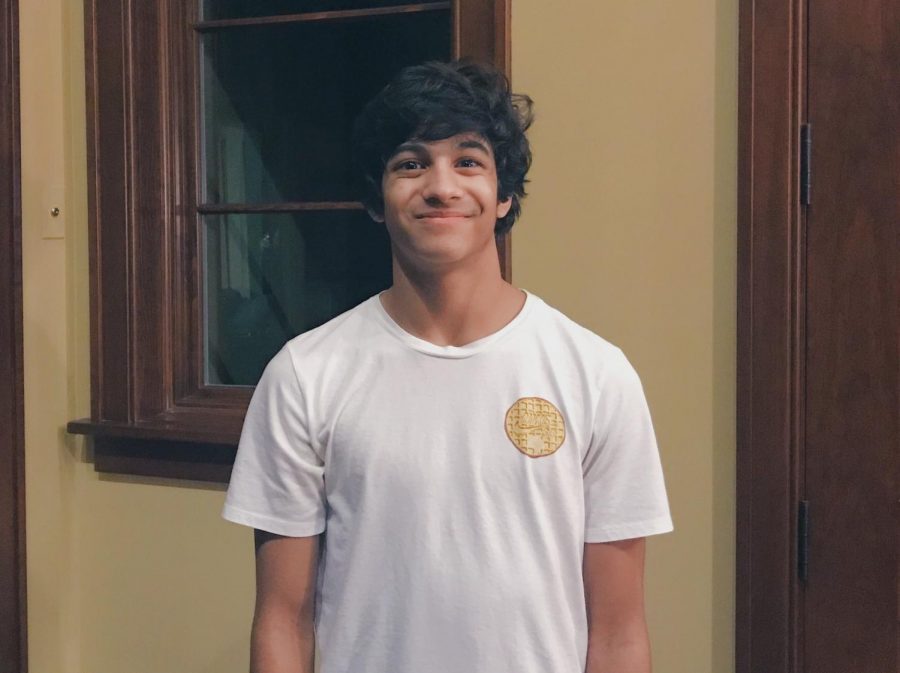 Armed with only the rudimentary experience of the fifth-grade required musical, Snow Biz!, sophomore Ali Azeem mustered up his courage and auditioned for this year’s musical, Peter Pan.

“I was very, very [nervous during the audition],” Ali said. “The first notes [I sang]– I’m pretty sure I failed hard. It did not sound good.”

Despite Ali’s nerves and apparent lack of experience, the audition went off without a hitch. With that, Ali landed a spot in the much-anticipated musical.

“I was really nervous waiting for [the cast list],” Ali said. “I hit refresh on the cast [website] tons of times waiting for it to show up. Seeing my name there was a big relief because I was like, “I don’t know; I don’t really think I did that well.a��a��a��

Ali’s immediate and surprising aptitude for musical theater was perhaps cultivated from his years of watching his brother perform in FHC Theater’s productions.

“I joined [musical] because my brother was in it his junior and senior year, so I really liked watching him in that,” Ali said. “So I decided I’d like to follow thata��. The other half was just that I liked [theater] in general.”

While Ali’s prior endeavors in the theater simply involved viewing- with a sprinkling of a good ol’ fifth-grade production- Ali had a musical foundation on his side. Most notably, singing has always been a passion of Ali’s.

“[The musical aspect] is honestly my favorite part because I love singing,” Ali said.

As such, Ali has found the vocal rehearsals to be greatly enjoyable thus far. Peter Pan rehearsals mark Ali’s first time experiencing classical training for singing, and he certainly appreciates that technical aspect.

“[Vocal practices] have been nice, actually,” Ali said. “There’s a lot of stuff that Mr. Ivory wants us to do that you wouldn’t normally do, like different techniques for singing and stuff.”

To add to his solid musical background, Ali has been a part of the school orchestra since sixth grade as a violinist. Though it is not his primary focus, Ali is fond of the class — so much so, that he would never trade orchestra for choir in spite of his love for singing.

Ali believes the four years of orchestra have served him well in his venture into theater, in terms of finding comfort on the stage and even reading music.

“I’ve got experience [going on stage],” Ali said. “It’s not the same, but it’s definitely similar, like looking at the notes and knowing vaguely what it isa��. I think having a little bit of experience definitely contributes to me wanting to do [theater], and I know that I can do more musical stuff. So I love being able to do it in a different way.”

However, Ali’s musical knowledge ends where dancing begins; he went into his knowledge with no dance training whatsoever. Nevertheless, another passion of Ali’s unexpectedly presented an advantage.

“I have absolutely [no dance experience],” Ali said. “I was just like “Eh, why not [just jump into it]?a�� I’m somewhat good on my feet– I have to be for tennis. So I wasn’t super nervous about that.”

Tennis has occupied a significant chunk of Ali’s life. The sport plays a meaningful role in the Azeem family. As a result, Ali has been playing for around ten years.

“We’ve been a tennis family,” Ali said. “[My brother] Humzah plays tennis, my sister plays tennis, my dad plays tennis. We’d go out to FHC- or East Hills, back when they were still open- and we’d rent out a court and play family doubles. So that was a lot of fun. We’d watch tennis on TVa��. I’d watch, and I was like “Wow, this looks really fun; I want to get into this.a��”

Through the many years, tennis remains a perpetual interest of Ali’s.

“It’s definitely a passion,” Ali said. “Even with musical going on, I still try to find the time to play tennis. I take private lessons and do group sessions.”

As for the near future, however, the musical has taken priority for Ali. While having tennis “take a backseat,” is not ideal for Ali, he is excited about where the musical will take him. Rehearsals only just recently began, and he has already taken a great liking not just to theater itself, but to the people involved.

All things considered, Ali is certain the imminent performances will be outstanding.